Early Mustangs like this 1966 GT fastback remain a bit of an anomaly, often pulling larger prices than their drop-top siblings. Is it the fantastic look? The practicality? The relative rarity? Whatever the reason, there are a lot of things to like about this awesome black fastback.This isn't a car for the purist looking for a stock, survivor-type pony. What this car offers instead is high-performance that doesn't go too far and instead offers the traditional look that people have admired from day one. The black paint is sophisticated and attractive and gives the GT an intense look that suits its personality just fine. Finish quality is excellent all around, making this a car you'll look forward to driving and won't mind pulling into a favorite cruise night or car show. There's no definitive way to say whether it's a real GT in these years, but it's certainly got all the right indicators, from the fog lamps up front, to the badges and red rocker stripes on the sides, to the twin trumpets through the rear valence, it totally nails the look. Bright chrome bumpers, those all-important '289' badges, and correct polished trim all give it a detailed look that is extremely attractive.The attractive black Pony interior was recently restored and looks spectacular. The seat covers, door panels, and carpets were all replaced and show well, and if not for that aftermarket center console, it could almost be a concours piece. The wood-rimmed Shelby-style steering wheel is new and complements the white cue ball knob on the Hurst shifter, which, you'll note, shows five gears instead of the usual four. The gauges are quite possibly original (and further evidence of a real GT) and in good order, with an original-style Rally-Pac on the steering column. That's an original AM/8-track radio still in the dash, so you know the guy doing the work had his priorities straight: horsepower first. We also love the practicality of the fastback, with a fold-down rear seat that expands trunk space exponentially. And speaking of the trunk it's nicely finished with a correct plaid mat and a factory styled steel wheel and redline tire that would've been original spec.No early Mustang feels right with anything but a small block under the hood, but this one is packing some additional firepower in the form of a 331 cubic inch DSS stroker motor. Quick to rev yet surprisingly torquey, it makes this fastback feel quick without working too hard. Ford Blue engine paint, chrome valve covers, and bright red plug wires make for an attractive engine bay that still captures the 1960s. An open-element air cleaner wears a reproduction decal that helps seal the illusion. The engine is filled with a Comp Cams camshaft, AFR heads, and a big QuickFuel carburetor on an Edelbrock Air Gap intake. The transmission is a Ford Motorsports T5Z 5-speed manual hooked up with a King Cobra clutch and feeding a set of 3.55 gears on a Trak-Lok in the 8-inch rear end. A custom dual exhaust system with X-pipe sounds spectacular with that familiar 5.0 performance sound. And you're just not going to believe where those Halibrand-style wheels came from: a 1981 Chrysler Cordoba! They're fitted with modern performance radials yet it still nails the 1960s performance look.Fastback Mustangs never stick around for very long, and if you want one of the best we've seen that you can still drive and show, this is an excellent choice. Call today! 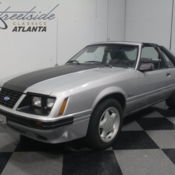 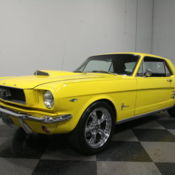 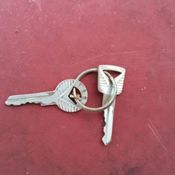 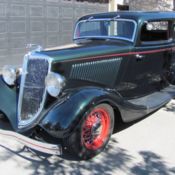 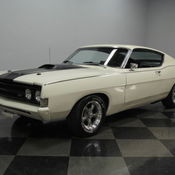 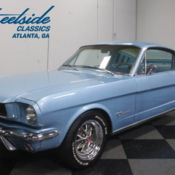 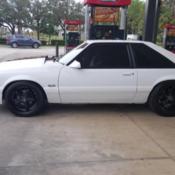 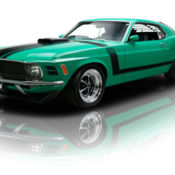 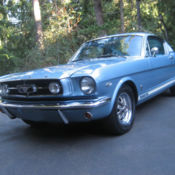 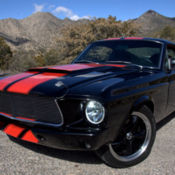