Need something to haul your track car to races or your garage queen to shows and exhibitions? MotoeXotica presents a truly unique vehicle in this 1986 Ford C8000 Fire Truck hauler. Designed in the style of mid-1960s race car haulers used by many racing teams of the period, this Ford-chassis, Grumman-bodied and Caterpillar-powered diesel is now a car hauler that used to be a fire truck.

Ford make this cab style from the early 1960s to about 1988, so you get the appearance of a much older truck with a newer chassis.

The truck features a rebuilt Ford/Caterpillar 3208 634 CID turbocharged diesel V-8 engine, making 250 horsepower and hooked to an automatic transmission. The final drive ratio was changed so that the transporter, loaded with a car and towing a 12,000-pound trailer containing another car, will travel at 75 miles per hour (Note: a trailer is NOT included). The rebuilt engine has new belts, gaskets, hoses, fuel lines, pumps and brakes. Rebuild was completed seven years ago and since then, the truck has made many cross-country trips to various vintage auto rallies, including the California Mille, Copperstate 1000 and Run to the Sun, without incident. Besides hauling two entrants to the Cavallino Classic Sports Sunday Concours in Palm Beach, Florida in 2011, the truck was displayed near the show field at Mar-a-Lago and received a lot of attention.

Truck has such driver’s assist features as power steering, power four drum air brakes (new) and electric trailer brakes. There is a two-horsepower diesel auxiliary generator on board that powers to multiple 110v outlets, runs the air-conditioning and charges the house batteries.

While the three-person tilt-cab was manufactured in Louisville, Kentucky, conversion specialist Hodges Custom Haulers created the body, which will hold any width car, but the vehicle cannot be taller than 60 inches. Car deck is an all-aluminum beaver tail with in-floor lighting and has a fully enclosed rear aluminum deck with canvas openings at the front and bank for easy access and loading. There are also a 12,000-pound, remote-controlled winch for easy loading, four large storage lockers under the deck and two-piece all-aluminum loading ramps.

Its red exterior shows good patina. Cab, roof, doors, fenders and cargo area are all in good shape. Exterior is festooned with stickers and graphics. Previous passenger side windshield wipers left scratches on the glass. The 10-lug black steel rims are shod in Goodyear G395LHS 11R22.5 tires in front with Michelin XDN Grip 12R22.5 tires in back.

Inside, the black seats, carpet, headliner and dashboard are all in good shape, as is the steering wheel. Truck has air-conditioning and a JVC AM/FM stereo with CD player. Truck comes equipped with town and air horns. Truck comes with full instrumentation, a Citizens Band radio and all of the gauges work as designed.

Much like the Volkswagen Beetle, the annual changes to the C-series trucks were slight. In the 1980s, as Ford began adding its blue oval logo to all models, the C-series gained it in 1984, where the old cog-and-lightning bolt crest used to be.

No special operator’s license or insurance is needed to drive this vehicle. All of the event and marquee stickers (including ones from the owner’s participation in the Italian Mille Miglia) are easily removed, including the Backfire Motorsports yellow siding.

The Ford C-Series was a medium-duty cab-over engine (COE) truck built between 1957 and 1990. It was used primarily for local delivery and fire apparatus. Many of the fire trucks came merely as cab and windshield models. In production nearly unchanged for 33 years, the C-Series was the longest-produced commercial truck in North America at the time it was discontinued. Models consisted of the C-500, C-600, C-700, C-750, C-800, C-850 and C-900. Like the F-900, the C-900 also included a “Big Job” model. Diesel-engined trucks included an extra zero in the model designations (i.e. C-8000 or C-9000).

Competing vehicles to this 1986 Ford C8000 include the Chevrolet Kodiak and GMC TopKick models.

The previous owner acquired this truck on July 13, 2009. This transporter tends to draw crowds wherever it goes and is ready for its next owner to enjoy! Current mileage on the odometer shows 83,453 miles. It is sold as is, where is, on a clean, clear and mileage exempt title. GET OUT AND DRIVE…er, HAUL!! 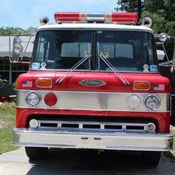 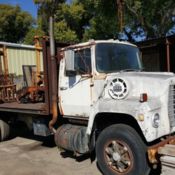 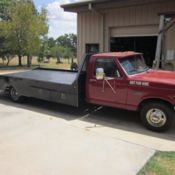 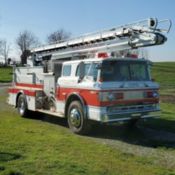 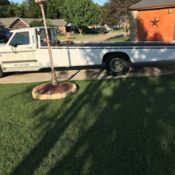 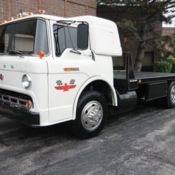 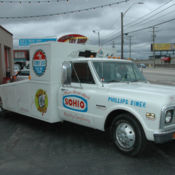 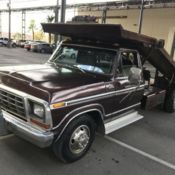 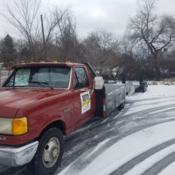 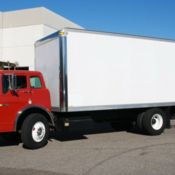