Denny Dotson Automotive is proud to offer another incredible find. We acquired this gorgeous Ferrari from the original owner right here in Columbus. It is a 1979 Carbureted Ferrari 308GTS with 22K original miles. We bought this car along with another low mile classic exotic. We took it right over to NJB Ferrari service for a fresh timing belt, water pump, tensioners, plugs/wires, fluids, Carb adjustment, Michelin rubber(for the original 14'' Cromodora wheels, ect... It is as complete as you will find anywhere. Every tool(never used), hard to find trouble light, all of the books, manuals, and case. This car is not an old car that has been re-done or restored. We did no paintwork. We did not restore the dash, console, top, or seats. We see so many that have the engines painted to give the illusion of care, or the interior re-sprayed so it looks better than it should. Why not buy a car that actually is nice, and stands on its own. This is that car. All original. The way it was meant to be. A testament to the care and proper storage by the one and only owner. Everything works properly, and it drives as good as any we have had, or been behind the wheel of. Hard enough to find a quality example, but to find a black over black one owner car with 22K right miles is almost unheard of. The colors alone could be worth as much as 30% to the value. We do expect the car to sell on its first run. It has not been offered for sale before now. This is a great chance to buy this valuable 308 before word spreads of its availability. The reserve has been set very reasonable for the caliber and pedigree. The Ferrari 308 is a mid-engined 2-seater sports car designed by Leonardo Fioravanti at Pininfarina. Available in coupe (Berlinetta or GTB) and convertible (Spider or GTS) the 308 originally had a fiberglass (‘vetroresina’) body, but this was soon replaced with steel. The 308 broke new ground in a number of ways. It looked as though U.S. emissions and bumper regulations were going to eliminate the current V12s and fragile 246 Dino monocoque from the profitable American market, so Enzo took a middle path. The Dino’s successor would have a 2,927 cc 4-cam V8 motor – the first in a Ferrari road car –and a separate frame. The 308 appeared initially at the 1973 Paris Salon as the Bertone–bodied 308 GT/4 2+2, an blunt wedge with an undesirable back seat, which nevertheless sold 2,826 examples in four years. The GT/4’s cousin would be a different proposition. The Ferrari 308 GTB two-seater, with bodies built by Carrozzeria Scaglietti appeared in 1975 and the first 712 were fiberglass, a groundbreaking move for Enzo Ferrari. Early 308 GTBs also had dry-sump engines, although the targa-top GTS from 1977 did not. The 308 boasted 240 bhp and 150 mph top speed and proved durable and popular. In all, 2,185 GTB Berlinettas were sold in four years and 3,219 GTS Targas. Recently the Ferrari 308 has experienced a growth in popularity due to its classic 1980s styling and association with legendary 1980s popular culture icons such as Tom Selleck (Magnum PI) and Christine Brinkley. 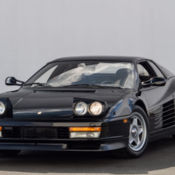 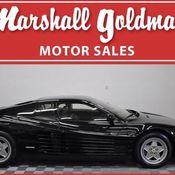 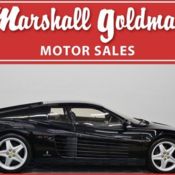 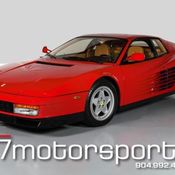 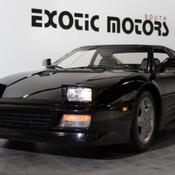 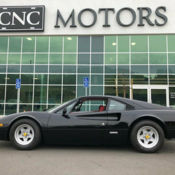 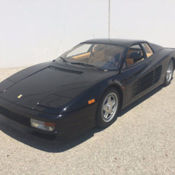 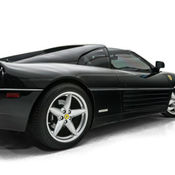 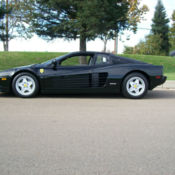 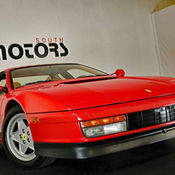