We are proud to offer this beautiful 348TB finished in Grigio Silverstone with Dove interior. It is said that this is the only 348 to be imported in this color combination to the US, while every other Ferrari is the typical readhead, this combo stands out like no other. Aside from its rarity, this car has been enthusiast owned by its last 3 owners and maintained that way. This is by far the best driving 348 I’ve ever driven, better than my testarossa and my previous 355.

The First Owner of this car was the importer for Ferrari in Switzerland and Germany which drove the car under his dealer for 4k miles as an MSO, in 1992 the second owner Michael Omartian (First titled owner) spotted the car up forsale in Hollywood Sports Cars in Hollywood, California and had to buy it, he paid $82,000 with 4k miles. At this time, he had HSC add a metal cleat to the front spoiler to reinforce the front bumper in case of a bottom out, all the lower valances painted to match the car, and a Tubi exhaust installed.The car was then dealer maintained at HCS and Thoroughbred Motorcars from 92’ through 96’, 4k miles – 21.5k miles. During that time, it had multiple services stamped in the booklet and a recall on the belt in which led to the heads being rebuilt. Car was then sold to Chris Smith in which he traded in his 93 Lotus Esprit to Ferrari of Atlanta for this 348. In the end of 99’ Chris sold the car to Auto Sales Group INC. in Pompano Beach, FL. Shortly after, Mr. Morehead purchased the car from them with 27k miles. Mr. Morehead was a 50 year SCCA governor for Florida, in which he raced his IMSA 69’ AMX from the day he bought until the day he unfortunately passed, which was earlier this year. He was a true gear head, in his later years he became obsessed with Ferraris becoming a very active member Ferrari club America. Throughout his owner his owner ship he maintained and respected this car as if it were his child. During Moreheads ownership, he had the first major service done at Autocraft with 28400 on the odo… this included timing belt and everything associated with a 30k mile service. Then in 2007 with 33200 he had another 30k mile service performed with the addition of a new clutch and throw-out bearing. In 2010 he had the entire AC system rebuilt at a cost of over $2k. This was the last belt service that has been done per documents, although the family member who inherited the car said it had been done at the beginning of this year but with no paperwork. The way he cared about his cars I would believe it, but unfortunately do not have documentation for this. The car does accompanied with original books, manuals, keys, and full documentation. During the process the luggage and tools were misplaced.

This 348 cosmetically is amazing condition but does show some wear from over the years. The only issue with the paint is a small scratch on the front bumper. The interior is all original and has help up pretty good for its age. Known for being fragile, everything works in the interior. Passenger window is a little slow but does work, very common. Radio turns on but nothing is heard. No other other known issues we are aware of. AC is ice cold.

Mechanically this car will outperform any 348 or 355, engine and transmission run flawlessly. No smoke or leaks at all from the drivetrain. Clutch engages perfectly with no slippage. Pulls hard through all the gears and feels very tight. Most recently the alternator has been replaced and fuel pumps rebuilt, since then it has been driven over 300 miles and has performed amazing without a hiccup. The Exhaust gives it a nice note with no drone, really sounds amazing when you open it up and you hear that high revving v8 scream.

Being a TB Berlinetta this a hard find, coupe gated shifter cars are sought after. This color will not be seen again. 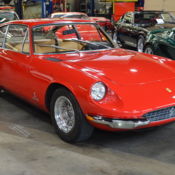 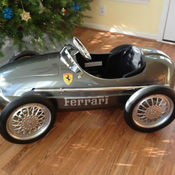 57 Ferrari Enzo Speedster Racer Pedal Car - ONE OF A KIND 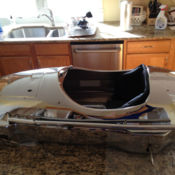 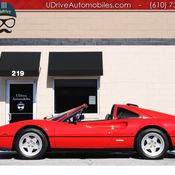 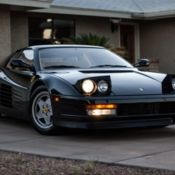 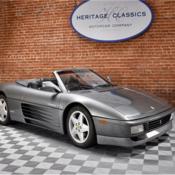 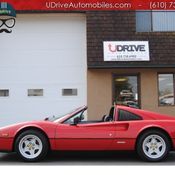 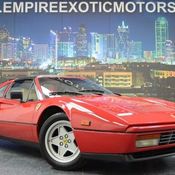 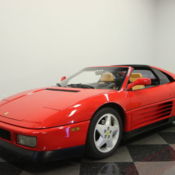 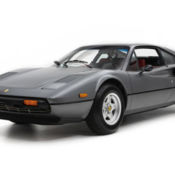