This truck has been relisted because the last buyer changed his mind on the purchase!!!

The best of the best! Gorgeousone owner 1977 Chevrolet C/K 1/2 ton 4wheel drive short box Silverado pickup. The engine is a400backed by a 350automatic transmission,both have been rebuilt and perform flawlessly. The full time hubs were converted to locking hubs right after the truck was purchasedin 1977. The owner was a mechanic at the local Chevrolet dealership where he purchased the truck. The truck was the best you could get in 1977, ower windows that work perfectly, ruise control that also works great, ilt wheel, ower steering and brakes. The owner did not order the truck with power door locks. Dual gas tanks

In the late nineties the truck went through a full frame on restoration which looks as good today as it did right after the restoration as you can see from the photographs! The owner purchased new GM OEM front fenders and doors, id not want to install patch panels in the places where they typically rust out. The original box was replace by a 1987 box that the owner purchase from the forest service. The forest service removed the box from the truck and installed their own service box, he box was brand new, ever used. The corners of the cab where they rust out were replaced as well. There is not a speck of rust anywhere on this truck with the exception where you have minor surface rust on the suspension parts which in minimal at best. The truck has spent most of its life in the garage after the restoration with fewer than 7K miles out on it. The truck was rarely driven after that and never in the rain or winter time.

The engine has less than 7,000 miles on it since rebuilt by a local engine shop here in the valley, ransmission, othfront and rear differentialsand suspension all have been rebuilt as well. The truck runs and rides beautifully for1977 pickup. I have the original carburetor/air filter housing and glove compartment insert that came with the truck. The insert still has a information sticker attached that came with the truck when new. I also have most of the receipts that the owner kept from work that was done to the truck during the time he had it, ncluding the original bill of sale! There is other original paperwork that will come with the truck as well.

The pictures says it all about the interior which is perfect with the exception of the headliner which looks good but should be replaced someday. The interior was completely torn out, ight down to the dash components and redone. All the wood grain is original and not touch, erfect condition. The dash and door panels were re-dyed to their factory color and they are flawless as well. New seat cushions and covers were installed along with carpet and some of the trim.

I believe this truck is truly one of the best looking and performing 1977 short box chevy trucks around that is mostly stock. The exterior colors are a PPG med blue poly and med gray poly that has been clear coated. I have the paint specs and formulas for the paint. I forgot to mention, here is still one original headlight that still works perfectly on the drivers side.

I just purchased this truck from the original owner, tried to purchase it last year but the owner did not want to part with it. He finally lost his storage area where he had the truck and decided to sell it to me. I have drove it a few times, hat a delight! 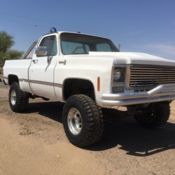 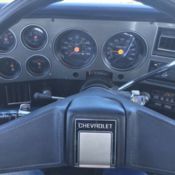 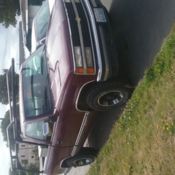 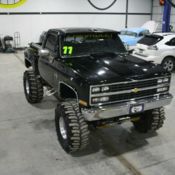 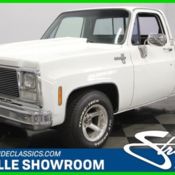 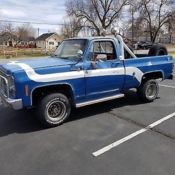 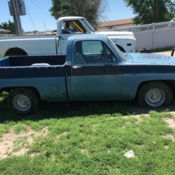 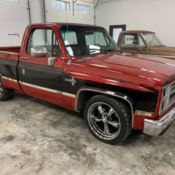 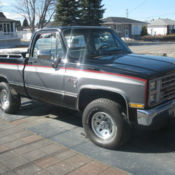 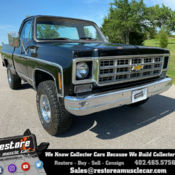