After projects were moved in and completed, this one got further behind. Has been stored in my shop, except for the last two or three years, when it was moved outside and covered with rainproof tarps.. Impala has been started and moved around every four or five months. The car runs and drives, but to make it dependable, the engine would need to be rebuilt. The engine has been serviced, the brakes have been rebuilt, the suspension has been rebuilt including shocks, a new exhaust system was installed around ten or twelve years ago, but is still quiet and does not leak..

The headlights looked so good, I decided to do the same to the front upper grill surrounding (Cats Eyes), and continuing the 60's theme, created the rear taillight treatment,which also frenched and tunneled the taillights. The original 59 lenes will fit in to the opening by trimming the mounting extensions.. My idea was to use the 59 lenses and build a surround out of sheetmetal, painted the same color as the car.

The rear tailfins were also built to Mimicthe shaved, Hood, Decklid, Fender Tops, Doors andSide moulding. The car had no side trim, or front and rear bumpers when I got it, so my plans were to install Front and Rear Rollpans.

When I decided to sell my Impala, I went to my storage trailer and got out every piece of trim and moulding that I had gathered for this project

I was very careful and made sure that every piece to complete the car was there. I laid out every piece and taped everything in place on the car to be confident that every piece was there.I then wrapped all the pieces inwhite paper and put masking tape on them to holdthe paper on the trim.

Still needs a lot of work, but upon completion, would be an awesome Custom. Thedrivers side was completed, exceptfor final blocking, but in 2001 an ice storm damaged the roof. I have another roof that goes with the car, which is in very nice condition, but would have to be welded in place.

For sale at other venues, so could be removed from this venue at any time.. 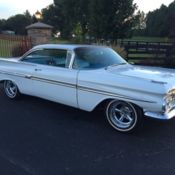 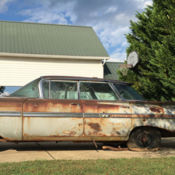 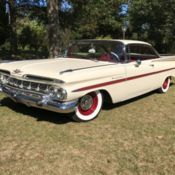 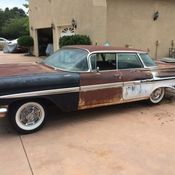 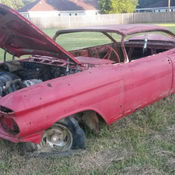 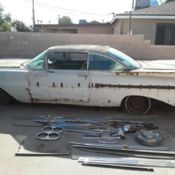 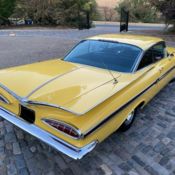 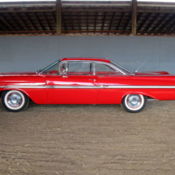 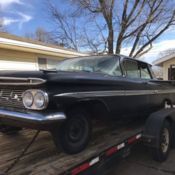 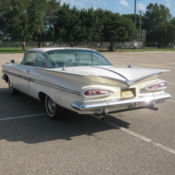