The story goes that this real Big Block Super Sport El Camino was purchased here in Sacramento California on Fulton Ave by a single lady to haul her small horse trailer around. The bed of the El Camino held horse hay and horse accessories only. The El Camino was stored in a barn until the lady passed away and the son took ownership. The car was then sold to a family friend in Post Falls, Idaho where I bought it. At that point I had been following the car for about 3 years. The gentleman I bought it from gave me the history on the car you just read about. I have documentation to back up the details with one full build sheet from under the seat and a partial build sheet found underneath the fuel tank. I also have the old title. The condition on the bed real proves its history as a horse hauler by its great condition that shows it was never used hard, it has very few dents or scrapes and zero rust

After following this California car for several years as I said above I finally got my chance to buy it!!!The only reason I am selling it now is I am getting the family El Camino back from my dad who is moving out of state and I won't have room in the shop for both. This real numbers matching SS El Camino is accident free, has never been apart, never modified and is waiting for a new curator. I went through the whole brake system, car has original 2 piece GM brake rotors and properly numbered rebuilt GM brake calipers, AC Delco brake booster and master cylinder, original 12 bolt rearend with the 5 original Super Sport wheels(numbered), new front springs, 4 new shocks, jack and wheel accessories included, the distributor is original to the car as well as date coded to the build sheet(11/69) it has been completely rebuilt and has a pertronix unit installed, original carburetor has been rebuilt as well with proper numbers confirmed, original 400 transmission with GM tag, the SS dash is uncut and doesn't appear to have ever been removed, the wiring is original and in great condition. The overall body is in great shape, small amount of normal Chevelle/El Camino rust in the usual outer lower section of the front fenders, just the outer layer though which is unusual. No rust behind the rear wheels or below the rear window(small amount of surface only). One quarter and dime size on roof where the vinyl roof used to be. Easily fixable. The floors are rust free along with the package tray underneath the bed panel. I believe it to have had one repaint in its life but it is now peeling off, nothing hiding on the body. I can't find any bondo. A new high quality opg brand fuel tank will be included in the sale along with new fuel sending unit, the old one was junk. I restored the original rear fuel tank straps. I have a set of T-3 headlights that will go with car to help keep her original

Let me know if you have any questions 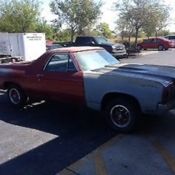 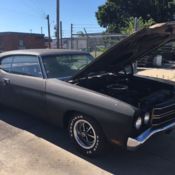 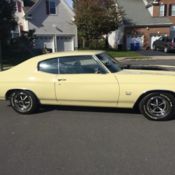 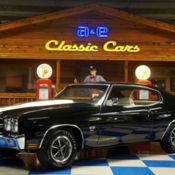 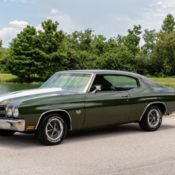 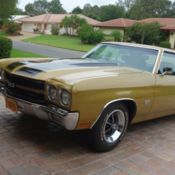 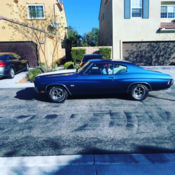 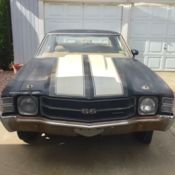 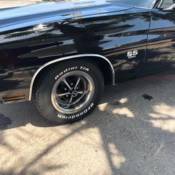 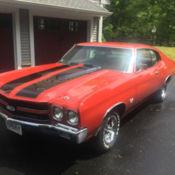