This Sub will be on display and for sale at the June 2nd Pomona Calif Classic Car Swap Meet.The truck is also for sale locally and this auction will end early if the vehicle sells locally in either event.
I hate to let this go, but I have too many other projects right now and too little time. The Sub is completeand iscurrentlyregistered. Please contact me, planbrisk@aol.com, to arrange a personal inspection.My son and I have have owned this Sub for over 20 years. We purchased it from a prop house locatedin North Hollywood, CA. It was a stunt double.It was represented as one of the several vintage Subs used in the 1987AcademyAward winning film "Harry And The Hendersons." The film won Best Makeup and Hair Styling. Not Best Film, sorry.
For the film, the Sub's roof panel was modified to explode up and outward. In the scene, theunconsciousBig Foot-Harry isbeing transported in the back of the Sub by Dr. Wallace Wrightwood, the character who captured him, (played by the late Don Ameche). Harry comes to and sits up, which causes the roof to deform bulgingupward. It was a total wreck when we purchased it. While my son was in high school it became a loving father and sonproject. We didn't restore the Sub, which it deserved. We "refreshed" (as in triage) its many safety and drive abilityissues to make it a safe daily driver. My sondrove it throughout his juniorand senior years including to prom and his freshman year in college. When my son moved onto other interests, I decided tokeep it. The mileage shown on the odometeris the actual mileage we have put on the truck since we have owned it. The speedometer was one of the first items repaired along with the brakes. The odometer was reset to 0 miles at that time. Fulldisclosure, the truck has many more unknown total miles. I have driven it less than 200 miles in each of the past 19 years and only 600 miles in the past 7 years. The oil and filter are changed annually. Sta-Bil has always been added to the fuel during this long period of infrequent use. Keep this in mind when consideringthe value of the work that has gone into this Sub. It always gets head turning attention wherever it's driven. Make a Saturday grocery run to Whole Food's or Gelson's and everyone in the lot ignores the latest MB, Audi, BMW, Porsche or other luxury SUV.Please see the photos.
During the trucks refurbishment, every system was addressed. Included are:New Painless wire harness. It was converted to 12 volts along with an alternator. New wheel and master cylinders and new brake lines. New stainless steel gas tank. The aforementioned roof panel along with the entire body was repaired and repainted. All doors close snugly and the locks work. The roof was coated with Line-X. Notice the color and texture differentiationin the photos. It gives the roof the look of a 40'swoodie'sroof. The running boards were also coated with Line-X. A cool sun visor was added for the proper attitude. The front and rear bumpers were re-chromed. The front has override protectors.It has periodcorrect fog lamps. The engine is a 1954 235cid. It was rebuilt at great expense, (no babbit pounding 216 here). Hardened exhaust seats were added for unleaded fuel. The engine idles like a watch, smoothly and quietly, at less than 400 RPM. We adapted a HEI distributor to the engine, so starting is almost instantaneous. The exhaust system was replaced. The 3 speed transmission was rebuilt. A Hurst shifter was added. A new clutch was installed 300 miles ago.It was fully carpeted and the seats were rebuilt and recovered in pleated grey velour fabric. The front seat has 3 point belts and the rear has 2 point belts. The third row seat is missing. It has a new steering wheel. We also sourced a vintage NOS turn signal controller. The front and rear springs, shackles, shocks, king pins and tie rod ends were replaced. Front and rear wheel/axlebearings were replaced. All door and window weather stripping was replaced. All window glass channelsand regulators were replaced. All windowswork. All rubber grommets, bumpers and gizmos were replaced throughout. All of the gaugesalong with the speedometerwere repaired. The heater and defroster work. It has a Custom Auto Sound radio. A vintage hula girl and compass were added. It's wearing new Goodyear Wranglers on the corners with less than 300 miles. The rims have new beauty rings and baby moons. There is a new spare with a vintage jack and 4X lug wrench. New battery with a Deltran tender.
Flaws. The front floors have not been properly repaired. The temporary patch job done by others before we bought it, seemed adequateat the time. Rusty floors (sounds like a Grunge Band) are a common issue with 50's Chevy trucks. That still needs to be done. It was painted 18 years ago and the paint needs to be redone or clear coated to preserve the patina that is developing. There are several areas where tin worms are beginningshow their work. Look closely at the last 2 photos, around the A pillar and windshield. Those are the worst of several areas. I never installed a headliner. The radio and fuelgauge are not working. Fuses? The wiring to the fog lamps needs to be completed. There is a scratch on the passenger side door window and the driver side door window has a crack. To be safe, the brakes should be checked over.There are no leaks in the hydraulicsystem now, though low in total miles driven, the master and wheel cylinders are nearly 20 years old. Additional information or photos on request
I feel you could drive this truck anywhere right now. Or,I will assist loading the Sub on your method of conveyancefor transport.
I also will be listing several items of 50's era automobilia very soon, keep tuned in.

The truck has it's original torque tube drive shaft.The rear end gear set is probably 4:11. I am not sure.I drive the truck on the 405 and 101 freeways frequently.In 1951 there were not any high speed roads to speak of,so it runs best at under 60 mph 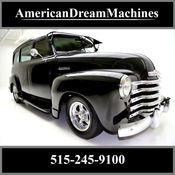 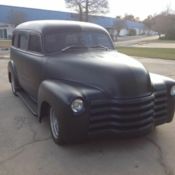 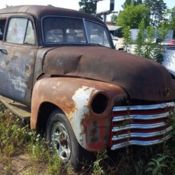 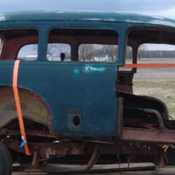 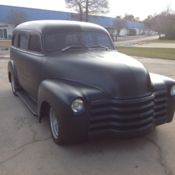 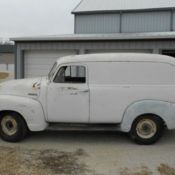 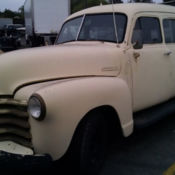 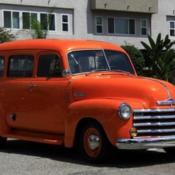 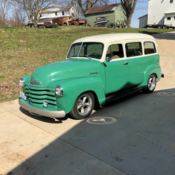 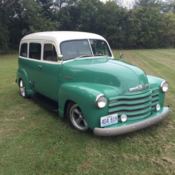