Up for sale is this extremely clean and fully restored 1968 Chevy Corvette Stingray Convertible C3. This corvette is equipped with a 454 block 427 V-8 engine. This car's vin plate dictates that it was originally equipped with a 427 Engine on its release date. The vehicles Rally Red paint is the original color that this car was painted from the factory when released. This corvette has been very meticulously maintained and will more than meet any and all expectations in every aspect. One would be very hard pressed to find a Cleaner C3 in overall Condition or Performance wise. This is a southern car....so...as one would expect....it is Rust Free. The exterior of this car is Extremely Sharp. The paint has a very deep look to it. At first glanc, one immediately notices the High Gloss Show car appearance of this Corvette. With no expense spare, this vehicles Rally Red paint reflects an almost wet look appearance of a freshly painted car. This corvette has several fine coats of paint with just the right amount of clear coats to separate it from the majority of other lesser completed restorations. One could not duplicate this paint job for less than $15,000. With only one lighter blemish on the cars left front fender....the cars exterior is near perfect. In short, the paint job is very impressive.....as it well should be. I give this paint job an overall conservative score of 9.5/10. The black top on this car is less than 3-4 years old and is in near like new condition. The Black and Red combination accent the lines of this car well. Also included is an original snap on hardtop painted in Rally Red which gives the car a more sleeker look. The top can be quickly removed or attached with little effort. This car is well matched with a 427 V-8 engine that was listed in the original factory build specific to this particular car. There were other engine options for these C3 Stingray, but the 427 is by far the preferred and most desirable of all engines. These 427 engines, with over 400 Horsepower have more than ample power for any type of street driving. Very powerful, yet easily controllable and manageable. This car performs exactly the way one would expect. Very fluid acceleration with refined Power and Speed. The engine is backed by a 4-Speed Standard Transmission with a very responsive shift that correlates and shifts perfectly with the cars 400+ Horsepower engine. The entire car was Fully Restored and completed within recent 3-4 years and has many newer parts....It has also been custom fitted with a more desirable Performance Ready oversize Aluminum Radiator Specific to these 427 cars. This was an original A/C Car when it was Released. You will find the custom Vintage Air - Air Conditioning to be more than adequate and extremely Cold. The car has been professionally aligned to specs and the suspension and brakes give the driver complete comfort and control while stabilizing the ride. The car is fitted with newer offset Cooper Cobra GT Radials with 225 70 R15's in up front and 275 60 R15's on the rear. The Wheels are Original Style Deep dish appearance Chevy Rally Style wheels in like new condition. Lets give the Mechanical of this particular car a conservative 9.5/10--Near Flawless! The cars interior, in extremely clean condition, really completes the car giving it a fully like new nostalgic feel. The seats are in excellent condition as well as the door panels and carpets. One feels like they have taken a step back in time to yester years while driving this fully restored 50 year old car. This car is very attractive and appealing in every way. This car draws plenty of attention wherever it travels and is a huge eye catcher. Everyone smiles when they see it! The Corvettes are by far the most collectible of the True Muscle cars. One could elaborate about this car and its condition for literally hours. The car and its overall appearance more than speaks for its self. Very, Very Impressive Condition. 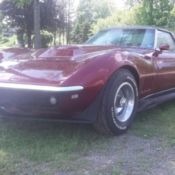 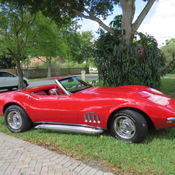 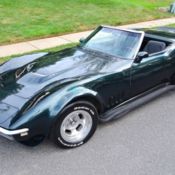 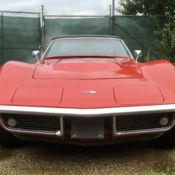 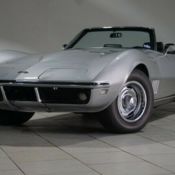 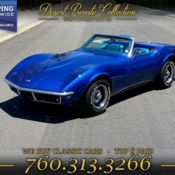 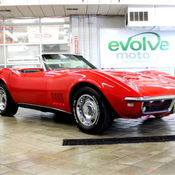 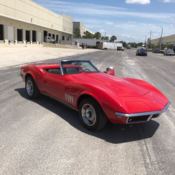 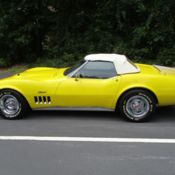 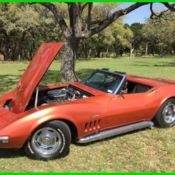