1973 Chevy Nova hatchback with clean titl, fisher body. When I registered the car at the dmv, they told me that the car is a Nova custom. Which is apparently an edition of the Novas.
The car is in good condition and has several upgrades. Has a 350 small block. I can send additional photos or videos if you are interested.
The motor is not original, due to the head gasket that wentout. However, the 350 5.7 motor and transmision from my 71 Chevelle project was removed and installed in the Nova. The past owner of my Chevelle claimed that the motor was recently rebuilt and has upgraded parts, it does have a bigger carburetor, bigger transmission, and driveshaft than the original 350 that my nova originaly had.The motor was recently swapped last month and has been running amazing.
Has new oil and transmission fluid. The alex fluid was also replaced and also the u joints on the driveshaft, as well as being balanced by a driveshaft company.
The interior is in overall good shape however, there is a bit of wear on the door panels. Seats were reupholstered, new headliner, new carpet, and new dash.
Has a stereo system, that includes a console with a custom made slot for an ipad. The iPad will be included and there are also a set of subwoofers in the rear.Also included, is an alarm system with two remote controls.
Couple of items replaced are new shocks with a coil spring around the shock assembly, new leaf springs with the bushings and bolts, underbody subbushings.
The car does not have the wipper arms on at the moment, I do have them in my garage and they need to be refurbished and reblade the wiperblades. As the original ones are dual.
The gas gauge is not working and is stuck on full. I do not know much about elctrical and im not a mechanic and do not want to be messing with wires that are related to the gas. Should be an easy fix.
A water temperture gauge was installed under the dash, but can be relocated. it is just being hold by a screw and bolt underneath in a factory hole under the dash. Was installed just to be able to view the tempture and has been running around 180F
The paint is a three tone, orange with a gold pearl, silver with metalic flakes, and black on the bottom.
I can explain much more and answer any qustions, if you send me a message and we could potentally chat over the phone, which would be best.
Located in Las Vegas, Nevada 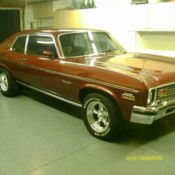 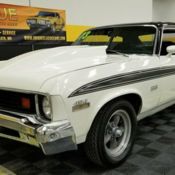 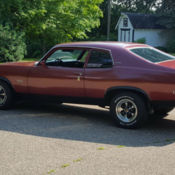 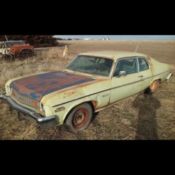 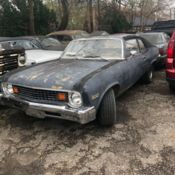 1973 Chevy Nova none hatchback all original 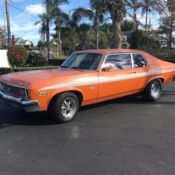 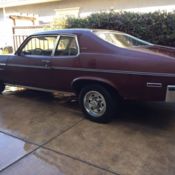 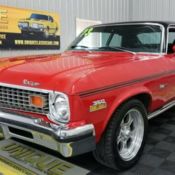 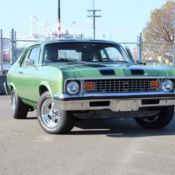 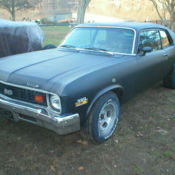