As cool as first generation Camaros are, t seems that EVERYONE either owns one or knows someone who owns one. And as much as we enjoy watching killer F1s parade through our doors, t's always nice to see a super clean second generation car. Being an avid Camaro fan, ou probably know finding a well done split-bumper tribute isn't all that hard. But the chances of scoring a documented, uthentic Z28 Rally Sport seem almost as likely as purchasing a winning lotto ticket. Luckily, ince the passionate gearheads at RK Motors Charlotte specialize in the unique and hard to find, e can offer you rare opportunities like this awesome Cranberry Red hugger. Sporting a numbers-matching drivetrain, hich follows a massaged 350 with a tough Rock Crusher 4-speed, he car was featured in Gary Witzenburg's Camaro: An American Icon. Wrapping an exclusive Deluxe Interior in all-original sheetmetal, t was chosen by the Auto Editors of Consumer Guide for their Muscle Car Chronicle. And, s a well maintained classic that's believed to have logged only 25K miles, t's a solid, oad-ready muscle car that'll take you right back to the high octane summer of 1971!

Assembled at GM's Van Nuys manufacturing facility in December of 1970, his super clean coupe is a customer ordered car that officially met its first owner at San Francisco's Ellis Brooks Chevrolet and began a 44-year life of impeccable maintenance. As a result, he car's all-original sheetmetal has never been wrecked, atched or subjected to any major bodywork aside from a new coat of correct Cranberry Red paint and fresh black stripes. And today, quipped with an original, nrestored trunk, t's very evident that this Chevy is more than just a weathered carcass that's been pulled from a field and subjected to a 'resale restoration'. Glossy pigment highlights well-aligned panels that were likely adjusted during their mild facelift. And, hile those impressive lines would rather scorch the boulevard than grace the concours, hey're an excellent embodiment of the charming character that makes the 2nd generation Camaro one of GM's most polar muscle cars.

General Motors envisioned the second generation Camaro as a working man's Ferrari and, hanks to a better timeframe and bigger budget, ffectively addressed many of the complaints enthusiasts had about the F1. Longer, ider, ower to the ground and more aggressive, he 'hugger' was certainly more of a driver's car, nd is widely regarded as some of the best iron Detroit ever produced. At the front of this coupe, correct Rally Sport fascia centers a chrome-trimmed, Z28" branded grille between small Rally Sport bumpers, right halogen headlights, orrect Rally Sport parking lamps and a sculpted D80 chin spoiler. Behind that fascia, correct Z28 hood anchors tinted, tainless-trimmed glass between body-matched sport mirrors, orrect windshield wipers and slender drip rails that flow in to correct reveal moldings. At the sides of that hood, clean fuselage centers bold "Z28" emblems between correct door guards, lean marker lamps, orrectly striped door handles and subtle rocker trim. And at the back of that fuselage, "Camaro" branded decklid hangs a "Z28" branded '70 Camaro spoiler above a guarded bumper, orrect Rally Sport taillights and a chrome trunk lock.

A lot of car buffs rave about the first generation Z/28 and Chevrolet's legendary DZ 302. But in reality, he LT-1 350 found under this Camaro's hood is a much better engine, specially when the pros at Indy Cylinder Head get their hands on it. That's right, his numbers-matching small block, hich hangs a correct 3970010 casting number behind a build sheet-matched "CGP" suffix and matching partial VIN, enefitted from $7,200 of Indy Cylinder Head upgrades that mix increased durability with big horsepower gains! At the top of the hot mill, polished, ainted and decaled air cleaner feeds a big Holley 4-barrel, hich rides on a familiar Winters intake. That intake feeds factory Chevrolet heads, hich center finned valve covers over bronze valve guides, ardened chromoly pushrods and Comp Magnum rocker arms. At the back of those heads, traditional looking distributor utilizes Pertronix performance ignition to sequence spark through correct Packard TV R Suppression cables. That spark compresses inside a bored and honed block, hich frames solid lifters, Comp flat-tappet cam and an Eagle 383 rotating kit. At the sides of that block, oated Hedman Hedders, quipped with factory-style smog tie-ins, unnel spent gases in to a large-diameter, rue-dual exhaust system. At the front of those headers, actory power steering joins a rebuilt Camaro alternator and tough Cloyes timing components to round out a roster of high quality ancillaries. And, t the front of those ancillaries, shrouded and decaled radiator rides between factory fender bars and correct Rally Sport nose braces.

It's pretty easy to confirm the authenticity of this handsome panther's appearance. Here's a through breakdown of the car's VIN and Cowl Tag.

Since this authentic Z28/RS is still paired with one of its original build sheets, e have the exact list of options installed by GM's Van Nuys assembly plant.

One of Detroit's best combinations of performance and style, arly second generation Camaros present excellent opportunity for savvy enthusiasts. And, ecause of their cool aesthetics, uthentic Rally Sports are some of the most desirable F2s on the market. With its clean bones and numbers-matching drivetrain, his fully sorted coupe is the kind of old school muscle that can make any enthusiast happy. And for the low asking price of only $59,900, t's one heck of a deal! 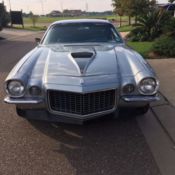 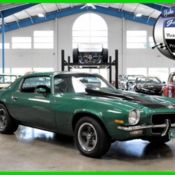 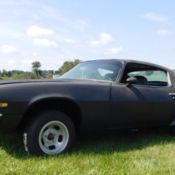 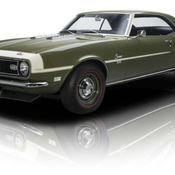 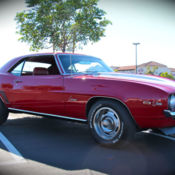 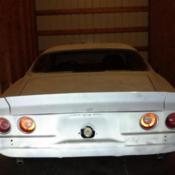 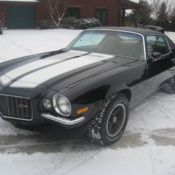 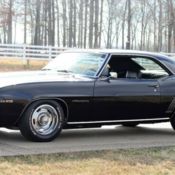 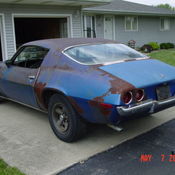 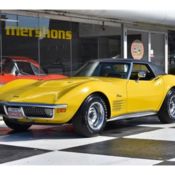