Everyone knows that taking weight out is the same as putting horsepower in, so starting with a compact car like the Nova makes a lot of sense when you're trying to build a hot street car. This 1970 Nova Restomod combines a modern-tech LS3 V8 with a sleeper look that perfectly captures the dual nature of Chevy's right-sized Nova. The idea was simple: take a modern, reliable powerplant with serious horsepower, stuff it into a Nova, and leave the rest alone so nobody will know. Yes, it's bright red and wears '396' badges, but that's still not enough warning for the pain this car can dish out. Finish work is outstanding, with great bodywork and super straight sheetmetal that was obviously prepped by experts who knew what they were doing. It's nice to see this one without a cowl-induction hood or stripes, although it does carry SS badges and a blacked-out tail panel, so folks might suspect something is up. Everything on the exterior, from the chrome bumpers to the stainless trim around the wheels arches, is standard Nova equipment, so this is definitely a car that could have been prowling the streets in 1970. And it's a 2-door post, which is a favorite of racers because it's lighter and stiffer than the hardtop, which is what serious racers want. A vast majority of Novas in 1970 were equipped with the standard bench seat (including this one), and if you're building a sleeper, you should probably leave it alone. The black upholstery is the perfect match to the red paint, and the thoroughly freshened interior looks as good as the bodywork. Again, they skipped the visible upgrades and keep this car stock, which tells you that this Nova is all about the business of speed. The shifter is still on the steering column and since the standard Nova dash and gauge cluster doesn't tell you much about what's going on under the hood, it has been upgraded with a set of Dakota Digital instruments tucked in there where nobody can see them. We also like that they focused on performance, so there's no massive stereo, just a simple AM/FM/CD head unit in the dash and the carpets are new. Finally, the trunk is solid and includes a correct mat and a spare tire assembly. All the mechanical work was done by Fantom Works, so you know it's right. Power comes from a new aluminum 6.2 liter LS3 V8 that's a tidy installation in the Nova's engine bay. This one makes no pretenses of being stock, and it's immediately obvious when you sport the LS intake manifold, fuel rails, and giant air intake. All the factory fuel injection components were retained, so it runs like a stocker and never gets cranky, no matter what you're doing. All 480 horsepower are channeled through a 4L85E 4-speed automatic transmission to a very trick Heidt's custom independent rear end with a 9-inch center section and 3.70 POSI gears inside. 4-wheel disc brakes are part of the deal and it barks through a snarling dual exhaust system that matches the car's aggressive look. The suspension is as competent as a Corvette and makes the most of the staggered 15-inch rubber on polished Torque Thrust wheels. With a ton of power, no fussiness, and big performance, this Nova represents state-of-the-art in sleeper technology. If your performance tastes run towards light weight and big horsepower, this screaming red Nova might be just the ticket. Call today! 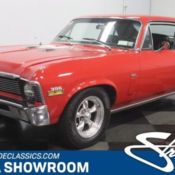 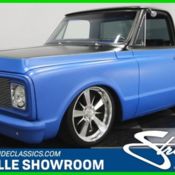 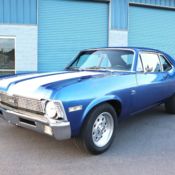 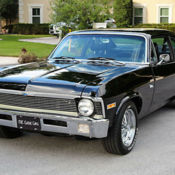 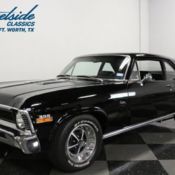 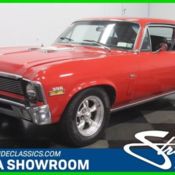 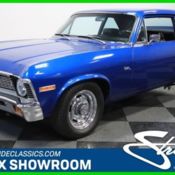 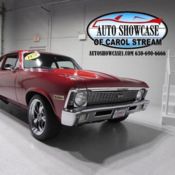 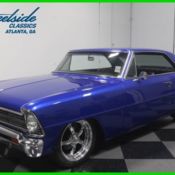 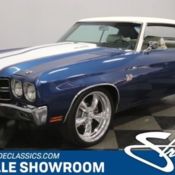