Do you remember the movie Aloha Bobby and Rose? Did it make you want a Red '68 Camaro? One that sounded just like that car did as it was ripping up the pavement? This car can fulfill that dream. It looks great and sounds awesome. Just try not to get into the trouble they did along the way. This bright Red Camaro is similar enough to the car in the movie to evoke the fantasy while actually being a much preferable ride. It looks better and is a better street car. (Paul Le Mat, the actor who drove the caged out, Trans Am race prepped car from the movie reportedly still owns it.) This one has a nice shine to it and is trimmed out in good looking chrome. A black SS grill leads the way underlined by a pencil thin chrome bumper. The cowl induction hood rises up smoothly, catching the light and hinting at the beast within. There are 327 badges of the front fenders as well as Camaro SS in script near the doors. The wheel wells and the rocker panels are both dressed in chrome and the staggered Ridler wheels give the car an aggressive stance and look awesome. The back of the car has a simple, clean look, with the rear spoiler, an SS gas cap and another sharp looking bumper. Open the door and you will find a very nice Parchment interior with black dash, carpets and headliner. The door panel is simple in all white with a long armrest and a slash of chrome through the middle. The bucket seats are comfortable with pleated seating surfaces surrounded by smooth vinyl. A three spoke steering wheel has a bowtie horn button and a column mounted tach to help you hit your shift points accurately. The stock dash gauges are supplemented by a trio of Sunpro gauges to keep accurate track of oil pressure, water temp and voltage. They are mounted under the center of the dash just below a Kenwood AM/FM/Cassette player for your listening pleasure. A black and chrome B&M T-handle shifter with lockout is mounted in the floor for the 3-speed automatic transmission. The black headliner and black carpets tie the look together nicely. Pop that cowl induction hood open and you will find that very desirable 327 engine nestled down in a neat and clean engine bay. It is set up to run strong and look good at the same time. A chrome air topper holds down a free flow air filter with a Holley QFT carburetor under it which feeds an Edelbrock intake and aluminum heads. Chrome valve covers with a Chevrolet in script and a red bowtie keep the oil where it belongs and an MSD ignition with red plug wires gets good hot spark to the cylinders to fire the mixture. Billet pulleys and a chrome alternator dress up the engine bay and an aluminum radiator keeps things running cool. All that free flow on the intake side runs out through long tube headers to Flowmaster mufflers that exit down in front of the rear axle, and the sound this car makes under power is awesome. The rubber meets the road through 255/35R20s in the rear and 235/45R18s in the front mounted on those sweet looking Ridler wheels. A bright Red, attention grabbing '68 Camaro with a free revving, sweet sounding 327. Sounds like there are some good times to be had with this car. Come on down and check it out. 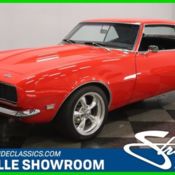 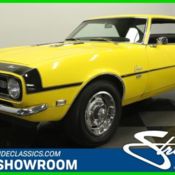 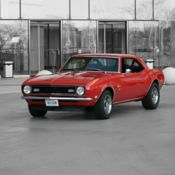 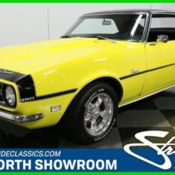 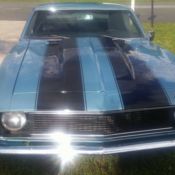 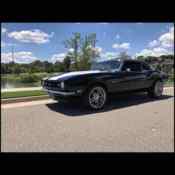 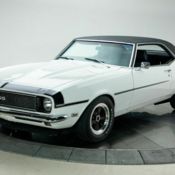 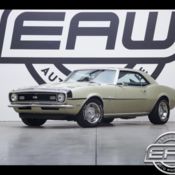 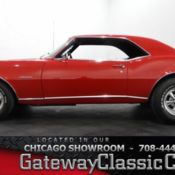 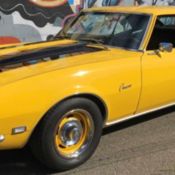