This 1954 Chevrolet Bel Air 4 Door sedan is a one sharp classic. It's got a two-tone exterior that'll make you nod in approval and the numbers matching engine under its hood still takes care of business with enthusiasm. As a '54, it came along to close out Chevy's first generation of the model and features a rounder form than its more commonly seen counterparts to give it a look all its own. Decked out with a turquoise and India ivory paint scheme, this '54 provides a fairly rare glimpse at its model in a more ample, curvaceous form and you can see how effectively it bridged the gap between the even more sizable, rustic versions that came before it and the trimmed down editions to follow. Its paint makes a solid showing in its present state and, while a freshening up would take it up a notch or two, there will be all kinds of appreciation for this Chevy regardless. This is a Bel Air, after all - a mid-'50s Chevy in its most coveted, well-equipped form. There's just so much style on display here - the extensive use of chrome surrounding the clear glass of the cabin, the ornate trim running the lengths of the sides before merging with the ivory accents across the rear doors and fenders and of course, that unmistakable Bel Air grille sitting just below the Chevy badge on the nose of the hood. The white bumpers in both front and back are a distinct touch you don't see all that often and they tie in nicely with the matching hood. Unlike so many of its counterparts from the era, this Bel Air looks super solid - there's no evidence of rust and the body panels are free of that wavy look that often indicates there's something more than just steel beneath the paint. Inside the doors is a turquoise cloth interior that was fashioned at a time a when people were becoming more and more inclined to get behind the wheel and explore their surroundings. Owing to the Bel Air's generous proportions, there's plenty of space inside - this is a broad cabin, with lots of headroom and plenty of real estate separating the front and rear bench seats. To each side, the door panels still cling firmly to their surrounding steel and are in good condition. A sizable, original-issue steering wheel still holds its place on the column and the turquoise dash features a slatted chrome panel that merges with the glove box, while just below sits a Vintage Air climate control system to keep things comfortable. Tap the center of the steering wheel and you'll hear the novel sounds of the custom horn. After more than 60 years of dutiful service, this Bel Air still carries its original 235 cubic inch inline 6 under its hood. Sporting a single-barrel carb on top, the engine starts right up and runs great as it pairs with the also-original 2-speed Powerglide transmission. This is an unusually solid, road-worthy vintage Chevy in all respects - it also rides nicely and its set of period-correct drum brakes bring it to a stop with no hassles. The undercarriage shows the patina you'd expect from a car of this vintage and could use a cleaning, but looks very solid. This charming classic rolls on a set of 15" steel wheels outfitted with Hercules tires. This 1954 Chevrolet Bel Air 4 Door Sedan is running strong and stands ready to make its next lucky owner very happy. Call today! 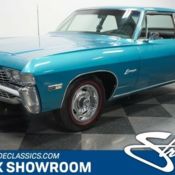 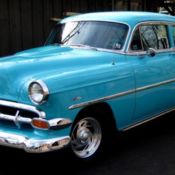 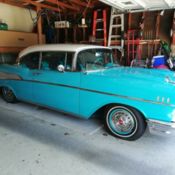 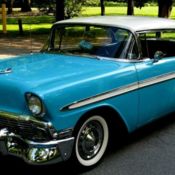 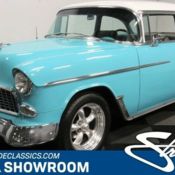 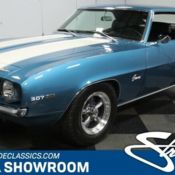 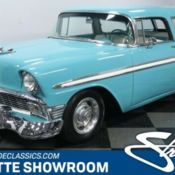 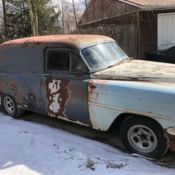 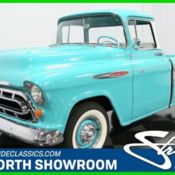 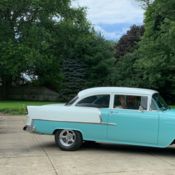