Despite tightening smog regulations, 973 was a good year for Camaros, nd this cool white coupe has a neat upgrades list that makes it one of the more appealing second-generation F-bodies. You don't need to worry about pedigrees and specifications with this one, nd it's still a hot property with sizzling paint and a fantastic driver-oriented interior.The biggest change in '73 was the addition of federally-mandated 2.5 MPH bumpers, nd while that doesn't seem like a big deal, t meant that most Camaros that year got big, gly reinforced bumpers that marred the otherwise slick design. But this car, ith an RS-spec front end, ept the wide-open grille and smallish bumperettes, hich were merely reinforced, nd therefore retaining the classic good looks that make these cars so popular today. While browns and yellows were in fashion back in 1973, his one has been more recently finished in bright white with a satin black hood stripe, hich results in one of the best-looking '70s F-bodies we've seen in a long time. It retains its blacked-out Z28 grille, hin and decklid spoilers and surrounds them with nice, traight bodywork and a deep shine that gives it a purposeful personality. There's not a lot of chrome, ut the front bumperettes, he rear bumper, nd the stainless window surrounds are all in excellent shape. Those high-back black bucket seats are every bit as comfortable as they look, nd they feature combat-ready slots for your racing harnesses (if that's how you roll). The upholstery looks appropriate in the mild resto-mod Camaro, ith a back seat that looks almost brand new. The wrap-around instrument panel gives the driver an array of bright analog gauges, long with a set of mechanical oil pressure and water temperature gauges under the dash just ahead of the shifter. You'll note that this shifter manages four forward gears, ot three, hanks to a 700R4 4-speed automatic overdrive transmission underneath. There's also a custom center console between the seats with a pair of cup holders that seem to merge neatly into those custom buckets. The original radio is gone, eplaced by a Kenwood AM/FM/CD stereo head unit which powers a set of big 6x9 speakers on the rear package shelf. In back, ou'll find a trunk that demonstrates none of the usual warning signs you see in cars that have seen the snow; this one is nice and clean.While emissions regulations were strangling most engines, his 1973 Camaro packs a built 350 cubic inch V8 that's considerably more powerful than its smog-choked ancestors. Dressed in Chevy Orange with chrome valve covers and a performance air cleaner, t looks the part of a muscle car powerplant and runs every bit as well as you'd hope. There's an Edelbrock intake manifold and Holley double-pumper up top, s well as a Mallory electronic ignition system to light it up. The aforementioned 4-speed automatic transmission is a great traveling companion when you're running hard, nd the 10-bolt rear end is nailed down with a set of traction bars that hook it all up. Long-tube headers feed a 3-inch dual exhaust system with Flowmaster mufflers and turn downs just ahead of the rear axle, o this is not a car for sneaking around, ut it does sound spectacular. Stock five-spoke wheels are some of the best looking of the period and now wear 225/60/15 front and 245/60/15 rear BFGoodrich white letter radials.A neat car with a desirable package of upgrades, ll wrapped in a fantastic bright white wrapper, aking it a blast to drive. Call today! 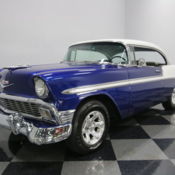 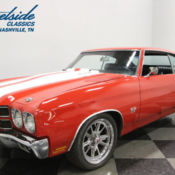 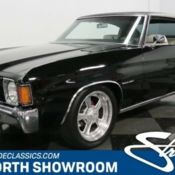 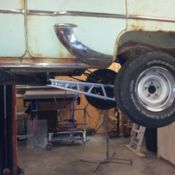 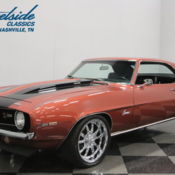 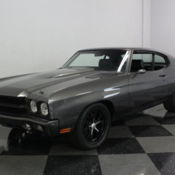 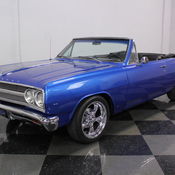 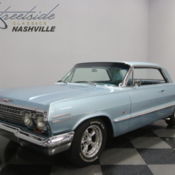 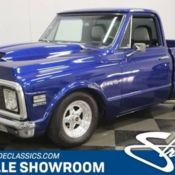 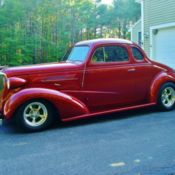