There's a book on my bookshelf called "The Art of the Lowrider" and it highlights the idea that the paint as much as any other part of a custom car is the purest form of automotive art. This 1949 Chevrolet Styleline sedan is a great example of that art transforming an ordinary car into something extraordinary. Believe it or not, the bodywork on this handsome pewter sedan is completely stock. Not chopped, shaved, smoothed, or frenched, it's just the way...Â Chevy designers did it back in 1949. Since it was going to be the canvas for some rather impressive paint work, they went the extra mile to make sure the sheetmetal was in great shape, and with a 4-door sedan, there are a lot of individual parts to fit correctly. The lovely soft metallic paint doesn't jump out at you, but a few minutes studying this car will have you in awe of the painter's talent. Check out the roof, which has wonderful geometric shapes flowing across it, even merging with the accessory visor up front. On the trunk lid, there's a mural of this car, a neatly done piece of airbrush work that shows influences from south of the border, the lowrider's place of origin. There are signs of use on the car, since it's been driven and shown quite a bit, but if you like the graphics, you're going to love the way the car presents itself today. The interior got a mild makeover, but nothing radical. Cream and brown vinyl on the seats and door panels works well with the overall color theme, and soft gold carpets on the floor are neatly tailored and include a heel pad for the driver. Original gauges are arranged around the perimeter of the speedometer in a single round pod ahead of the driver, and there's matching paint work on the top of the dash to tie in with the roof. Auxiliary dials live under the center stack, and even the factory radio is still in place, so there's a lot of originality here. Why reinvent the wheel when it looks this good? That big, round canister on the side window is called a "swamp cooler" and uses ice to blow cool air into the car, a rather effective tool in the pre-A/C days. The back seat is big enough for real-sized adults and you get a massive trunk that'll carry all your gear to a show. Even the powerplant is fairly stock: a 216 cubic inch Chevrolet inline-6, better known as the "Stovebolt." Rugged and smooth, it pulls the handsome Styleline around with vigor and feels buttery smooth while doing it. A chrome valve cover and plated air cleaner housing add some sparkle to an otherwise mostly stock engine bay. Upgrades include a 12-volt electrical system with alternator, a giant aluminum radiator, and an electronic ignition system to light the fires reliably. It runs superbly and you'll find that the 3-speed manual transmission makes the most of the engine's power band, feeling energetic yet comfortable at highway speeds. The undercarriage is largely original, so there's some surface scale and grease, but thanks to a lifetime someplace warm, it's not rusty, not even in the spare tire well. A lowered suspension gives it that traditional look, and there's a new single exhaust that sounds great blowing through straight pipes. The original wheels, hubcaps, and trim rings were retained and it even rides on correct bias-ply wide whites for a period look. A fun, beautifully finished, and unusual cruiser that will stand out in a crowd, this Styleline is entry level fun for a fantastic segment of the hobby. Call today! 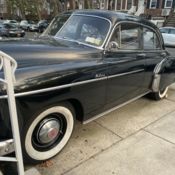 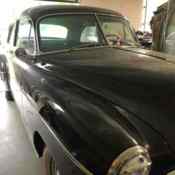 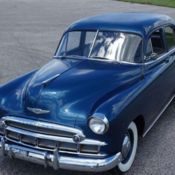 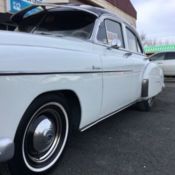 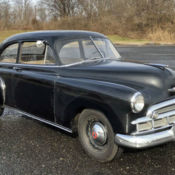 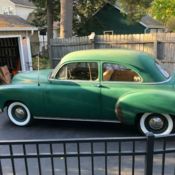 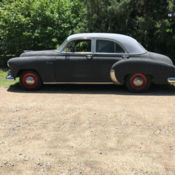 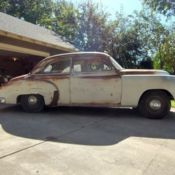 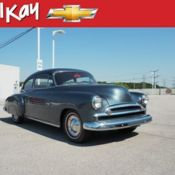 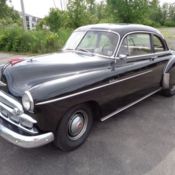