This 1957 Chevrolet 150 Utility Sedan is more than just one of the rarest versions of the icon. It's also a well restored vehicle that aims to look authentic inside and out while having plenty of extra power under the hood.
The Utility Sedan started out as a bare-bones machine, but today it has an honored place in Tri-Five Chevy history. It's the lightest of the bunch, which made them ripe for racing. And at 8,300 examples produced, only the expensive Bel Air Nomad is rarer. It's this rarity and distinction that there was a solid investment in this car's restoration. The factory-correct Onyx Black and India Ivory two-tone has been expertly reapplied to release an extra luster the factory couldn't give you over 60 years ago. And all the 150-model specific elements, including the color matched wheels with half wheel-covers, and the sash molding that were made famous by the upper level trims in previous years. But more than just the unique pieces, the Chevy 150 shares all the iconic '57 Chevy elements we all love. This includes the tailfins, upgraded California rear bumper, and dual jet-inspired hood ornaments. And of course, the large ultra-bright grille is as American as apple pie. And the reason why it's still so bold today is because they focused on the details during restoration like brightwork, glass, and panel fit.
Inside is another great two-tone arrangement. The black returns and now the white is traded for silver. The imitation leather on the seats with comfortable cloth inserts have a factory-correct presentation, but its freshness clues you in on how much has really been invested in this coupe lately. The artful pattern is also on the door panels, and everything from the headliner to the dash is in a coordinating black or silver tone. The no-frills arrangement means that even the back seat was removed for extra storage, and the result was the lightest Chevy for 1957. So while the Utility Sedans were intended for the handyman, they were actually the darlings of racers. That's why you can spot some great performance upgrades like the Hurst shifter, Sunpro auxiliary gauge trio, and large tach mounted in the center of the dash.
Under the hood is exactly what you want to see. Chevrolet touted how they enlarged the small block for more power in '57. So it's great to see it continues to carry the correct 283 cubic-inch displacement today. And that triangle air topper is a dead giveaway to the serious power underneath. This correctly has dual Carter four-barrel carburetors. While this is an upgraded setup from the car's original powerplant, it's also exactly what you would see the two-lane blacktop heroes do back in the day. In fact, this whole setup feels like a sleeper directly from 1957. Everything from the Chevrolet script valve covers to the original generator is part of a package that was thoughtfully designed/restored to feel like a time warp. You even get to control this power package with a T-10 four-speed manual transmission (they debuted in '57!) So as you look at all the pictures especially the undercarriage photos you'll discover a coupe that was carefully restored to be the old-school midnight hero.
The level of fit and finish has already won this Chevy multiple awards (give us a call to go over all of them.) It's the kind of interesting and rare classic that rarely comes around. So call us today or you might regret it tomorrow! 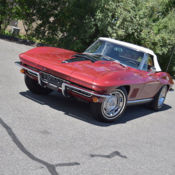 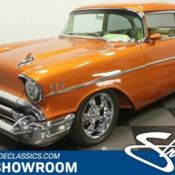 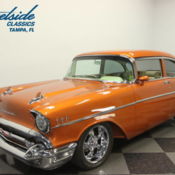 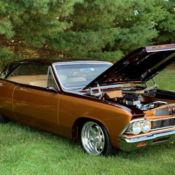 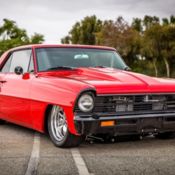 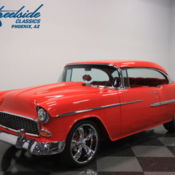 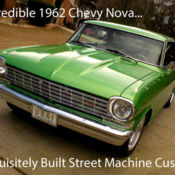 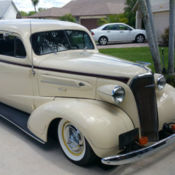 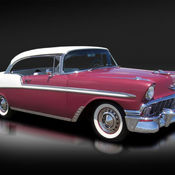 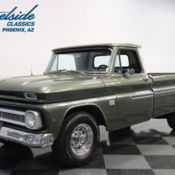