The C/K was Chevrolet and GMC's full -size pickup truck line from 1960 until 2000 in the United States from 1965 to 1999 in Canada from 1964 to 2001 in Brazil and from 1975 to 1982 in Chile. The first Chevrolet pickup truck was introduced in 1924 though in-house designs did not appear until 1930. "C" indicated two-wheel drive and "K" indicated four-wheel drive. The aging C/K light-duty pickup truck was replaced with the Chevrolet Silverado and GMC Sierra names in 1999 in the United States and C...anada and 2001 in Brazil; the Chevrolet Silverado HD and GMC Sierra HD heavy-duty pickup trucks followed. An all-new clean sheet redesign of General Motors' Chevrolet and GMC brand C/K-Series pickups dÃƒÂ©buted in mid-1972 for the 1973 model year. Development of the new third-generation trucks began in 1968 with vehicle components undergoing simulated testing on computers before the first prototype pickups were even built for real world testing. The redesign was revolutionary in appearance at the time particularly the cab departing from typical American pickup truck designs of the era. Aside from being near twins the Chevrolet and GMC pickups looked like nothing else on the road. GR Auto Gallery is pleased to present this 1977 Chevrolet Cheyenne K-10 for consideration. This pickup is owned by the original owner since February of '77. According to the owner this vehicle features its original 350 cubic inch V8 engine with 131863 miles. The 350 is paired with a 4 speed manual transmission that is smooth and strong in every gear. The owner has also kept great documentation throughout his ownership and has provided us with a large binder full of receipts and service that dates all the way back to '77. Key features on this K-10 include; 4 wheel drive chrome rear bumper power steering power brakes air conditioning 4 speed transmission locking hubs auxiliary fuel tank tinted glass sliding rear window intermittent wipers Cheyenne Trim heavy duty front and rear shocks swingaway tire carrier cargo area lamp two tone paint hood lock release undercoating below eye line stainless mirrors deluxe bumpers skid plates and more. This is a great running trunk that starts up with no hesitation please call or email us today for more information. To see over 80 photos of this car including under carriage please visit our website 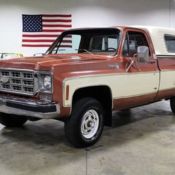 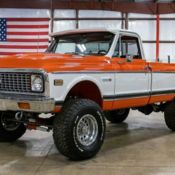 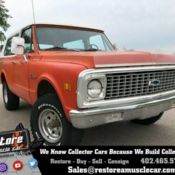 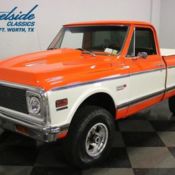 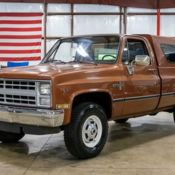 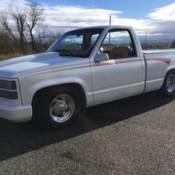 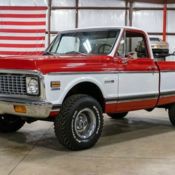 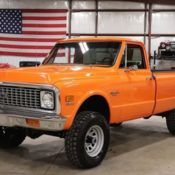 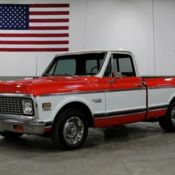 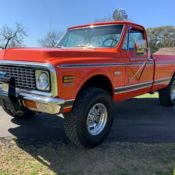