1969 Chevrolet Camaro X44 base 6 cylinder car that has been modified with a 2002 Camaro Ls1 engine and matching 4l60E automatic transmission. Clear VA title.
This car is a running, driving, stopping, project car. Leave it as is for the ultimate sleeper or take it as far as you want to go with new paint and interior.
This car was better than a barn find, it was a tire shop find. That means it's been inside for years and on a dry floor. Very limited rust. I will go into great detail to describe the car. I will also be posting many more pictures on a hosted album. PICTURES HERE
The main additions to this car are:
113k mile LS1 5.7 aluminum engine with matching 4l60E automatic overdrive transmission from a daily driven 2002 Camaro Z28 donor car.
The Pacesetter headers off of the 02 were used as well. Car needs the rest of the exhaust system, I have 2 pair of mufflers that the buyer can choose from if they wish for no additional charge. I figure exhaust is something that there is tons of preferences in and the buyer can get exactly what they want after they get the car.
02 Camaro engine/trans harness and ECM were sent off to a professional to be made into a standalone unit to run the car. Car has check engine light and OBD II plug. This also controls the electric fans that also came from the 02 and works like factory. Factory 02 radiator was also used, no cooiling issues with this set up.
Tanks Inc. powdercoated 69 Camaro tank with their drop in sending unit and in-tank pump.
Tanks Inc. LS line kit for fuel filter, regulator and all fittings and hose.
New master cylinder and booster along with new drilled and slotted front rotors and new disc brake calipers all from ss396.com
Electric speedometer and tachometer done in carbon fiber by AutoMeter and custom mounted into the gauge cluster and working.
Matching fuel, volt, water, and oil gauges are mounted by not wired up at this time. This gauge cluster was a later addition to the project, after the center mounted gauges were already installed. Everything is included that came with the Autometer gauges that came with them from the factory.
Car has a new heater core, but I do not have the hoses hooked up.
I have the original window sticker, the protect-o plate, tons of registrations and more paper work original to this car that will go along with it.
Body:
The body on this car is the best off any 69 I have ever had.
The floor pans were blasted front to back by the previous owner and I could not find any holes when I got the car. I sprayed the pans black, they were still bare when I got the car.
The trunk pan had a few pin holes that I went over with some coating after cleaning and sprayed black. There is some rust through around the tail panel supports inside the trunk. The worst rust I have found on the car.
Quarters- I believe they were replaced at some point. I could be wrong. Either way, they are nearly rust free! Have a look at this pics. There is a dent behind the drivers door. A good body man with a dent puller could fix it easily. I could have done it, but I would have had to mess up the paint to do it, and my whole goal with the car was for it to look like it was a stock car that had just been pulled out to drive, a sleeper.
Doors- rock solid. Drivers door does have a slight crease leading to the large dent in the quarter. I knocked the dent out of the door easily from the backside to make it presentable. Again, didn't want to go into the paint to completely repair.
New mirror and mounting kit installed on driver side door.
Fenders- Drivers side is great. Passenger side was hit at some point on the front corner and also broke out that side of the grille. Small quarter size rust spot at the bottom by the rocker. Easiest fix is to find a replacement fender and bolt it on. Same with the grill. They are easy to find original or aftermarket. I like the ratty look.
Hood- pretty much perfect.
Trunk lid- same as hood
Tail panel- nice. Does have a dent where something hit the rear bumper. Bumper will need replaced as it is bent. Again, the ratty sleeper look. I have a straight rear bumper with about the same finish as the front bumper that can go with the car.
Front header panel and lower valance- definitely useable. No rust.
Glass- all good except windshield. Has a crack on passenger side.
Interior
Original green interior.
Seats are actually all pretty nice except for the worn out driver's seat.
Carpet is old and dry rotted.
Headliner is split at 1 bow.
Shifter is the stock 02 Camaro shifter that has been cut down and bolted in. I wanted to find a 4 speed style boot to go around it and just haven't gotten to it.
New gauges as listed above.
Dash pad is there, but sticky and warped. Would need replaced if redoing interior.
Door panels are all presentable.
Arm rests could use restoration or replacement.
Wheels and tires
Just and old set of rally wheels that I had from another car. Tires all hold air but will need replaced if you want to use these wheels. I figure whoever buys the car will want to go with something more modern to match the drivetrain. If not, these wheels just need cleaned and painted and throw on new tires.
If you have any questions, after reading this book I just wrote, please feel free to contact me.
This car is only listed on Ebay, so bid to win. Reserve is very reasonable.
On Oct-28-16 at 11:33:06 PDT, seller added the following information:

I will not disclose the reserve (it should be met pretty easily) and I do NOT have a buy it now price. If you would like to make an offer I can't refuse, you're welcome to message me. Otherwise, I would like to see the auction run its course and see where it ends up.
I will try to have a couple of videos of the car posted over the weekend. I will also add more pics to the link provided in the ad. I will add a few progress pics from along the way and also the donor car that was used.
The car has new front shocks installed. I have new shocks for the rear but they have not been installed. They will be included with the car.
This was a 2 owner car prior to me buying it as a rolling body. The paperwork shows it being sold new in March of 1970 and then traded and sold again in 1976 to the second owner.

I'm in the process of uploading a cold start video of the car from today. Will try to get a driving video of it tomorrow after work. They will be posted in the picture link in the ad. If you have any trouble viewing them let me know and I'll send you a direct link.
Also, the AutoMeter fuel gauge in the cluster is now functional.

2 driving videos posted in the link. Not the best quality and sound, just an old point and shoot camera. Should be enough the show that the car runs, goes through all gears, and stops fine. 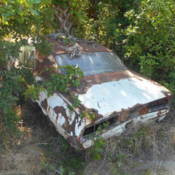 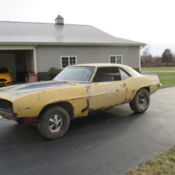 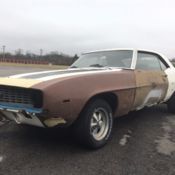 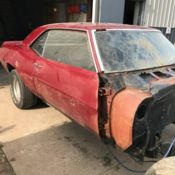 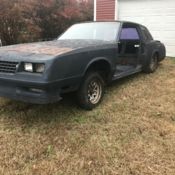 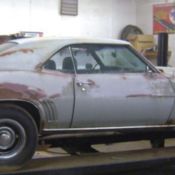 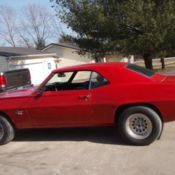 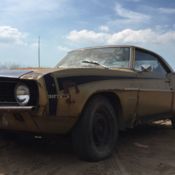 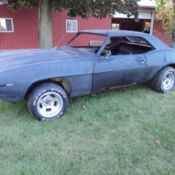 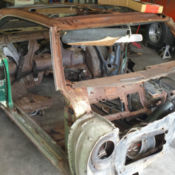