1994 Chevrolet Corevette Coupe First one BuiltEquipped with a 350cid/300hp LT1 engine with a 6-speed manual transmission. This Admiral Blue Coupe was the first 1994 vehicle produced and was first used by GM as an engineering test model, and later donated to Arapahoe Community College for engineering students to work on. When the college learned it was the first model year vehicle, administrators returned the car to GM and it was placed in the Corvette Museum. The front fender panels have been replaced with 1996 panels and the front parking lights have received a 1996 paint treatment as well. The vehicle is in the same condition as it was returned to the museum.This car was sold with a scrap salvage title, it's a museum car. Check with your state DMV in regards to registration.More pics to followCar sold as is, NO RESERVE.. 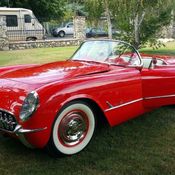