Cars like this 1971 Chevrolet Chevelle SS kind of blow every circuit breaker in a car guy's head, offering gorgeous looks, streetable comfort, and a massive hit of good old fashioned horsepower... in this car's case, about 800 supercharged horsepower. Beautifully built, scary fast, and filled with the best of the best, it's the kind of car that you should feel lucky to own, because you're getting it for pennies on the dollar.But before we get to all that horsepower, let's take a moment to admire that gorgeous dark green bodywork. It was restored to a rather high standard and the overall look is pretty darned impressive. We like the dark green, mostly because it gives great camouflage to the insane levels of performance lurking within, but with the white SS stripes running down the middle, nobody's going to mistake this for a sleeper. It's got the requisite cowl induction hood with locking pins, correct SS badging (although you'll note the '350' emblems aren't quite telling the truth), and a very stock overall look. Gaps are quite good, suggesting that there was a decent chunk of money spent getting it right and there are many who think the single-headlight look is the most attractive Chevelle of all, and I won't argue with them. The chrome bumpers look great, the stainless is polished, and even though performance was the goal, this isn't one of those cars where the little stuff got overlooked.The black interior is OEM, right down to the stock front bench seat, which proves this car is insane. The upholstery is correct and very neatly installed, giving it the kind of feel that you'd expect from a car destined for the show field, not the drag strip. Sure, there are a few modifications, including the trick B&M shifter, a Grant GT steering wheel on a tilt column, and a whole set of auxiliary gauges, including a monster tach on the steering column, an oil pressure gauge under the dash, and dials for the supercharger on the A-pillar. But this is no race car, it's got functional A/C that makes it a joy to drive under any conditions, and the radio has been upgraded to an AM/FM/CD stereo head unit. The trunk is pretty bare, but includes a separate fuel cell for the water injection system.With just 100 miles on the fully new drivetrain, the 800 horsepower comes easy to the 415 cubic inch small block V8, which is a bored-out 400 Dart block fitted with a Callies forged crank, Scat H-beam rods, and custom blower pistons. Up top there's a deep-breathing ProCharger F1-C supercharger that huffs 10 pounds of boost into the stout small block via a Might Demon 750 CFM "blow-thru" carburetor from the Carb Shop. It's fed by an Aeromotive fuel system and lit up by an MSD ignition system. A 12-rib belt spins the blower even at insane levels of boost, while the accessories are turned by regular V-belts, all of which are easily accessible up front. There's a giant aluminum radiator that keeps the whole thing at about 180 degrees all the time, and the hardware is race-grade throughout. Water injection helps keep detonation at bay, but unless you really turn up the boost (this setup is good for 1000 horsepower) it's probably overkill. It's backed by a built 700R4 4-speed automatic overdrive transmission and a 12-bolt rear end with 4.10 gears inside, which really work well with the boosted engine. There are new QA shocks and lowering springs all around and a custom three-inch exhaust system with X-pipe and stainless mufflers that sound truly spectacular. Traditional American Racing wheels are a relatively low-key look on this car and they carry BFG T/A radials up front and sticky Mickey Thompson drag radials out back.Impressively built and tuned so well that you might never know there's this much horsepower on tap. It's not exactly a sleeper, but nobody's going to suspect the animal that truly lives within this Chevelle's low-key bodywork. Call today! 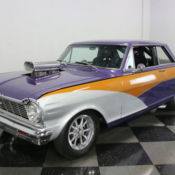 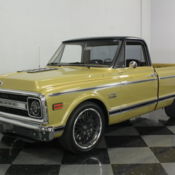 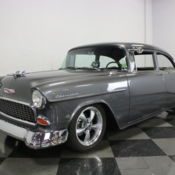 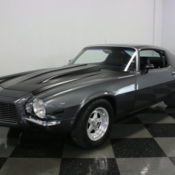 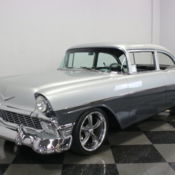 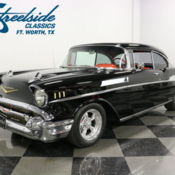 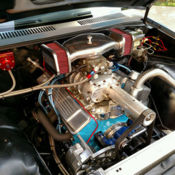 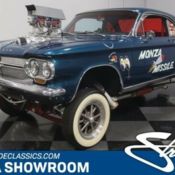 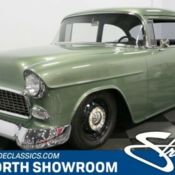 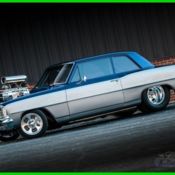