Sometimes cars get so many things right that you have to seize the opportunity to own them and then tweak them to fit your needs. This 1966 Chevrolet Chevelle is such a car, offering a big block under the hood, a bucket seat interior, and an awesome look that makes it just the way you'd want it if you'd built it yourself.Code D Mist Blue was this car's original color, but it's all but erased by the repaint that was done a few years ago. The original color doesn't matter, because the nasty Tuxedo Black now on the car will make you forget all about codes and ancient history. The bodywork is in good order, with nary a ripple or wave to be found, even on those big quarter panels which are notoriously difficult to get this straight. Note the subtle crease that runs from nose to tail; if the body isn't straight, that's where it will show up first, and on this car, it's razor-sharp. Looking at the reflection in our studio, you can see that there's some orange peel in the paint, and if there's a place where this car needs your attention, it's on the final finish; it just never got done. A professional wet sand and buff would make this car truly sparkle, and on a black car that looks like this, that's a very wise investment indeed. You'll also note correct 'Super Sport' badges used on the quarters, a proper blacked-out SS tail panel, and a super clean SS396 grille up front. They didn't overlook anything on this one.The interior is spot-on correct, sporting a set of code 761 black "imitation leather" buckets and a code G center console. Beautifully done, the interior is entirely new, from the headliner to the carpets. The seats have handsome seat covers with bright trim and cool metal inserts on the seatbacks, while the door panels show crisp detailing that was a hallmark of GM in the '60s. The center console sports a handsome clock angled towards the driver, as well as a proper chrome shifter for the TH400 3-speed automatic transmission that lives underneath. Gauges are simple, joined by a tach on the steering column and a trio of auxiliary dials underneath, and the controls are basic, but the important things about cars like this weren't the frills, but the hardware underneath. There's an AM/FM radio in the dash as well as a tilt wheel, so it's far from bare-bones inside, and the trunk is clean and ready to be finished.The engine is a correct but not numbers-matching L34-spec 396 cubic inch big block dressed for battle in correct Chevy Orange paint. Against that satin black engine bay, the motor simply pops, thanks to a set of chrome big block valve covers and a correct open-element air cleaner with Turbo Jet decals on top. An Edelbrock intake manifold and a big aluminum radiator are the only notable deviations from stock, but they look racy and only enhance the performance under the hood. Long-tube headers feed a 2.5-inch dual exhaust system with glasspack-style mufflers that dump just below the rear bumper, as original. Disc brakes up front provide reliable stopping power, and the entire fuel system, from the tank to the carburetor, looks to have new components. Cool Rally wheels are a refreshing change from the usual Torque Thrusts and carry staggered 205/70/15 front and 255/60/15 rear tires.Fast, fun, and handsome, this nasty black SS will make a fabulous summer cruiser and you can drive it with confidence knowing that the hardware is bulletproof. Call your favorite paint guy and turn it into something amazing. Call today! 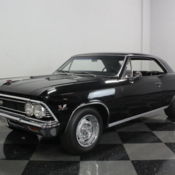 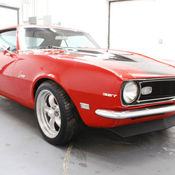 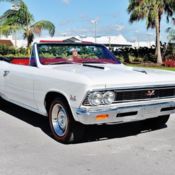 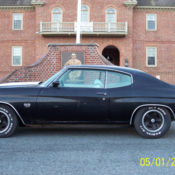 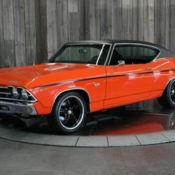 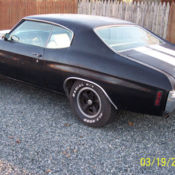 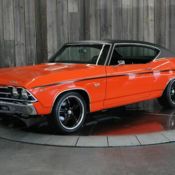 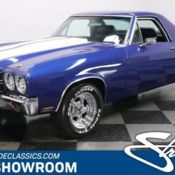 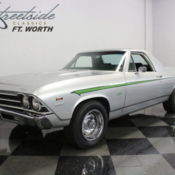 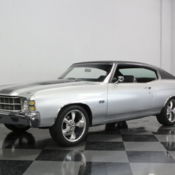