Just in time for the season you can get your claws on agenuine and rare 1969 Cadillac hearse!Fantastic restoration project! Amazing Halloween prop! This hellwagon's gothistory!

I bought it last year in Portland andtried to drive it home to Boise. It overheated in The Dalles so I left it with the only mechanic that was open (it was a Sunday). This mechanic was apparently not equipped to deal with a haunted hearse. He called me two weeks later and said it was ready so I drove another five hours back to The Dallesand tried to drive this bone bucket home again. This time the vinyl top ripped offin the wind, flapping like giant bat wings and raining some foul substance all over my head. I ripped the vinyl all the way off and got back on my way. It then overheated again andcaught on fire. Apparently the spirits didn't want this thing to leave The Land of the Weird. Disgusted, and a little scared, I left it on the side of I-84 and called the mechanic to come get it and try again, returning to Boise empty-handed again. Between a suspect mechanic and a national pandemic, I've spent the last year trying to get themechanic to get it fixed and get it over here to Boise.

When my wife and I finally made a third trek back to TheDalles to get it recently, the mechanic and his wife, who live way out inthe spooky boonies, told us they've felt very uncomfortable the entire time thehearse was sitting on their property. They said they're neighbors have also felt very uncomfortable and asked them several times to get rid of it.Atone point, the mechanic asked the elders of the local Native American tribe to come over and check out the hearse, and possibly bless it. The elders told him they sensed 5or 6 spirits associated with the hearse. A couple of people here in Boise have expressed interest in doing some paranormal research on this vehicle. It has a reference to Zuul on the back window and it even has skulls on the shift lever and front locks!

I intended to restore this and turn it into a Halloweenlimo, but it is beyond my limited abilities.It starts and runs, but it needs mechanical work. I have the invoice from the mechanic showingwhat he did to it, including a new radiator.The outside is rough and the inside is WAY rough, but I think it justadds to the character. Mileage on dash says 57913 - I have no idea if this is actual, or if it's 157,913, or 257,913, or 957,913. Your guess is as good as mine.

This is meant for someone who's been looking for a steal ofa deal on a vintage hearse and who has the time and ability to fix it up. My wife wants this hellheap away from ourhouse as it creeps her out. My loss is your gain! 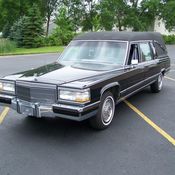 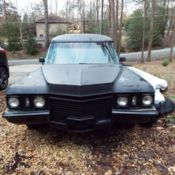 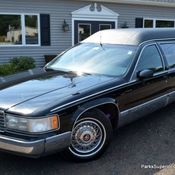 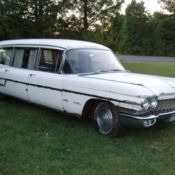 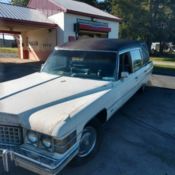 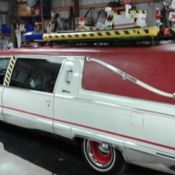 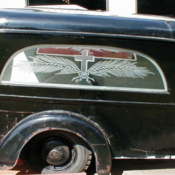 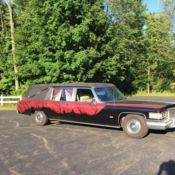 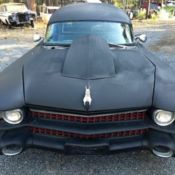 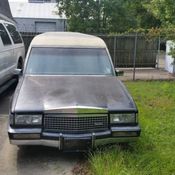