PLEASE CHECK WITH YOUR WIF, BANKE, AND ANYBODY ELSE THAT YOU NEED TO TALK TO TO MAKE SURE THAT YOU HAVE COLLECTED FUNDS TO BUY THIS HOT ROD BUICK . PLEASE DO NOT BUY THIS BUICK FOR A KID TO DRIVE . IT WILL HURT THEM - Built by a friend of mine in 2015 who is a Buick fanati, he put the best of everything in this car spent over $25,000 in it and had an excellent eye for detai, I fell in love with this car the first time I saw i, bought by me in 2016 .It has had very little use by him and I have done most of the miles street racin, and local cruising . I have driven it on a few 100 mile trips . Honestly it's so bad on fuel you can watch the needle move on the interstate . I run a mix of 25 percent Aviation fuel with 93 . It loves race fuel and aviation fuel when I can get it . Mega money was spent in a radical tear down and rebuild in 2014 and 201, lots of rare 1987 Grand National part, built on a 1985 Buick Regal factory slick top virgin no rust body . Corvette whit, PUI dark claret cloth ( burgundy ) NOS 1987 bucket seat and console interior that looks like a brand new car . Built for street tire shoot outs and G body shoot out races . In drag racing use this car eats automatic transmissions including built turbo 350, with normal driving they hold u, we were told this big block 402 has 600H, maybe it does maybe it doesn't . I have never found the transmission guy in my area that has the talent to keep a transmission together for more than 10 passes on the drag stri, a working good virgin GM 700R4 transmission is included but will need monster updates to hold up to severe duty or keep your foot out of it . With its custom headers and exhaust it's a PITA to swap . Its current 700R4 is on the verge . It eats built turbo 350s also . Built to the hilt 402 BB, demon car, 3:73 gears . Custom header, custom radiato, custom electric fan, stainless steel exhaus, flowmaster, NEW 0 mile BF Goodrich radial TA, Educate yourself on G body values and Grand National parts before you bid .Your welcome to come look in person like the old days . No dreamers . I have lots of high resolution photos of this car . It's the ultimate sleeper and road car . Everyone goes crazy over it when they see it and hear it . Clean and clear NC Title in hand ....... We are selling this car to buy another rollback and or Hodges Custom Hauler and 2 car trailer . If you own one there's a potential deal there as long as it's a Chevrolet or GMC and a crew cab . This car is for sale locall, it tax tim, and it can and will be sold this month - Have a question ? Frank @ 843 561 418, if there's no answer try later . At your expense not ours we can ship this car and extra parts anywhere in the United States .On Feb-04-18 at 08:50:25 PST, seller added the following information:

My in box is full this mornin, wow . This car has been in storage for the past 11 months . Any photos that you are looking at are post storage with zero detailing done for a photo shoot . In fact after church today I just took more . It's raining here in SC and the car has a damp mist on it . Numbers on engine : 1972 Chevrolet pickup 4 bolt main truck bloc, 210 HP when new 399929, 3964290. Heads started out life as oval port closed chamber 101c, Paint is base clear PPG 2015 Corvette Arctic White WA956, Interior is dark Claret PUI and Genuine G, it has zero fad, dash is perfec, entire car is rust fre, frame is perfec, entire front end as rebuil, tires have zero mile, Grand National wheels are new and shine like new with no rust . They love turtle wax rubbing compound in the green ca, hea, radi, wor, speedometer works when a 700R4 with a cable tail shaft is in it . Rear end is a 7.5 with Camaro gear set 3:7, all brakes are ne, ac system is replaced in the das, there are no brackets or compressor on the engin, the fans are dual electric with a controller . It runs cool in the hottest summer day . You will not be cool on the hottest summer day . Car smells new because it is . New front fender liner, new wheel well moldings and all exterior trim . Stainless steel exhaust from front to bac, All jambs look as good as the rest of the ca, request any custom photos and I will send them . Any trade deal will be done where eBay gets their fees and will be done through eBay . 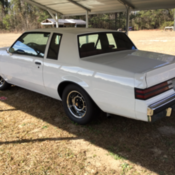 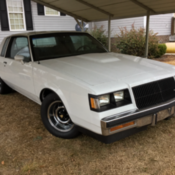 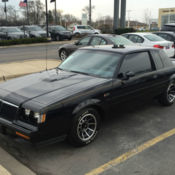 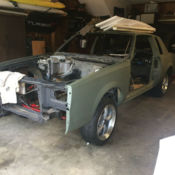 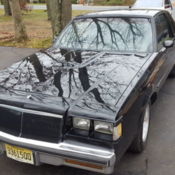 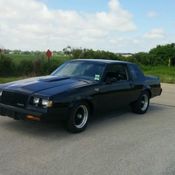 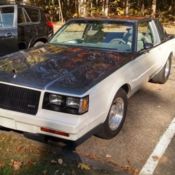 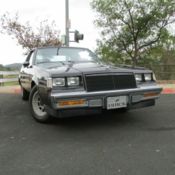 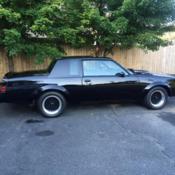 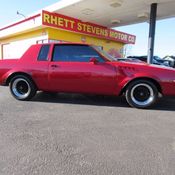