In 1955, the BMW Isetta became the world's first mass-production car to achieve a fuel consumption of 3 L/100 km or 78 MPG. It was the top-selling single-cylinder car in the world, with 161,728 units sold.
Initially manufactured by the Italian firm Iso SpA, the name Isetta is the Italian diminutive form of Iso, meaning "little Iso".

In 1956, the government of the Federal Republic of Germany changed the regulations for motor vehicles. Class IV licenses issued from that time onward could only be used to operate small motorcycles and could no longer be used to operate motor vehicles with a capacity of less than 250 cc. At the same time, the maximum capacity allowed for the Isetta's tax category was 300 cc. Class IV licenses issued before the change in the regulations were grandfathered and allowed to be used as before.
This change in regulations encouraged BMW to revise their Isetta microcars. In February 1956 a 300cc engine was introduced. The engineers enlarged the single cylinder to a 72 mm (2.8 in) bore and 73 mm (2.9 in) stroke, which gave a displacement of exactly 298 cc; at the same time, they raised the compression ratio from 6.8 to 7.0:1. As a result, the engine power output rose to 13 HP at 5200 rpm, and the torque rose to 13.6 ftlb at 4600 rpm. The maximum speed remained at 53 MPH.
In October 1956, the Isetta Moto Coupe DeLuxe (sliding-window Isetta) was introduced. The bubble windows were replaced by longer, sliding side windows.

This particular Isetta is very well kept and has been updated with a couple of modern amenities such as an upgrade stereo, navigation and a backup camera. Complete with it's picnic basket set and original Owner's manual, this Isetta is checks off all the right boxes. 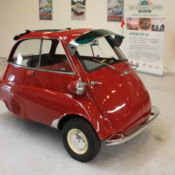 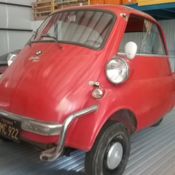 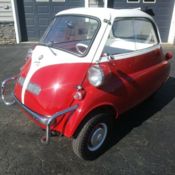 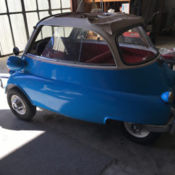 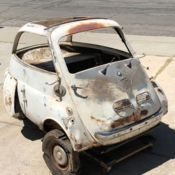 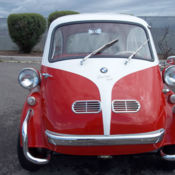 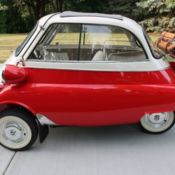 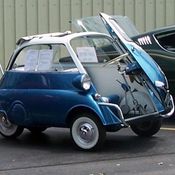 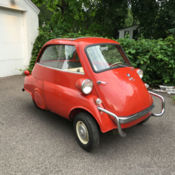 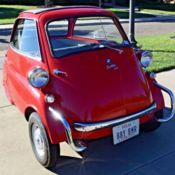