The AMX was designed to appeal to both muscle car and sports car enthusiasts and was successful in both worlds. Tire melting acceleration made them frequent fliers at drag strips around the country and in SCCA road racing they competed in the B-Production class against cars like the Shelby GT350. One of only 836 four speed 360s built in 1970. Rare, unique, and potent. All the hallmarks of a collectible car. Check it out. While many of...Â the AMXs were painted in wild colors and festooned with sponsor decals, this one is presented in a nice Brown color that may help you avoid attracting unwanted attention while you are out for a cruise. A white stripe cuts a C-shape from the top of the windshield, around the side windows and back up to the leading edge of the front fender. The look up front was redesigned for 1970 with a new flush grill that incorporated the headlights trimmed in chrome and underlined with a nice chrome bumper. The power bulge on the hood has two openings for a functional Ram-Air induction system to feed the beast within. The look at the rear end is sweet with the slope of the rear end descending smoothly between the sail panels to the super clean arrangement of full width taillamps with a single reverse light in the middle. That is underlined by another sharp looking bumper with a couple of chrome exhaust tips peeking out from underneath. Open the door and you will find a Tan interior, which like the outside of the car, is understated. Kind of like a powerful athlete dressed up in a suit, rather than in a uniform with their number emblazoned on it. The door panel has a pleated center section trimmed in chrome piping with a wood tone insert in the armrest. One thing that makes this car unique is that it was the only two seat, steel bodied, American car built since the '57 T-bird. And those seats are comfortable with pleated cloth centers and vinyl side panels. A two-spoke steering wheel sits in front of a stock dash panel that is also wood toned with a 140 MPH speedo on the left and the tach on the right. Ventilation controls are on the lower left and include those for the air conditioning system and there is a Pioneer AM/FM/CD player in the center, just in front of the Hurst shifter for the manual transmission. Open the hood and you will find a 360 cubic inch powerhouse nestled down in a neat and clean engine bay. This is believed to to be the original motor this AMX was born with as it went down the assembly line. There is a 4-barrel carburetor feeding the stock intake and heads which were nicely designed by AMC to produce good horsepower with tons of low end torque for both launching the car off the line and out of corners. Signs of good maintenance include a wiring harness has been updated and a newer master cylinder operating the power front disc brakes to make sure you can haul this car back down from speed. Because it was designed as a two-seat sports car, it has a short wheel base as well as springs, shocks and sway bars that were tuned for tearing up the backroads and road racing circuits of the day. There is a bit of rake to the chassis hinting at this car's serious intentions and the car sits on Red Line radial tires mounted on AMX Magnum wheels all around. Rare, unique, and potent. This car is good looking, fun to drive, and collectible. Call or come on down and check it out. 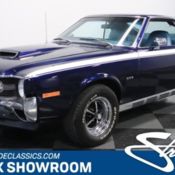 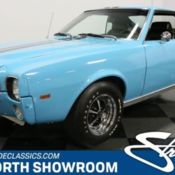 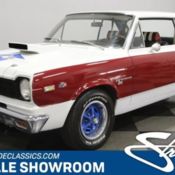 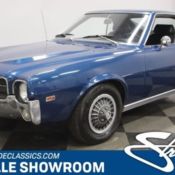 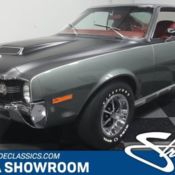 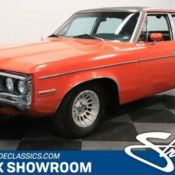 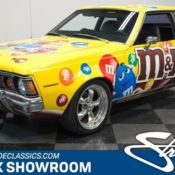 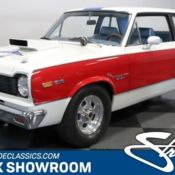 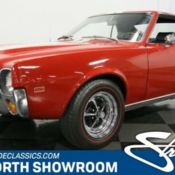