This is a very rare 1978 Matador Coupe, powered by a 360 Engine that needs to be restored or used for parts. Personally, I bought the car to restore, it's very solid and all there. The interior was removed from the car and the door panels were missing, but I secured two 1976 Blue Door Panels that go with the car. They aren't exactly what a 78 would use but close enough. The car has the 360 that's all there and air conditioning with cruise control. I'll add more photos tomorrow of the engine bay. There is a rust spot in the drivers floor that looks to be a very easy fix and some minor rust in the roof that's due to the vinyl roof leaking. The hood has some rust and the front bumper is awful, but there is an extra bumper too that goes with the car. You can see the extra bumper in the photo (although many folks restore the Matador Coupe and remove the Bumpers entirely). The car has 15 inch Mopar wheels that are not original to the car. The Wheel Covers are 1974 thru 1978 Mopar (Dodge/Chrysler/Plymouth) style. The car came from southern Pennsylvania and appears to be garage kept for a number of years. Lots of small dents and bumps and scratches. Only 2006 1978 Matador Coupes were produced in 1978 and about 396 were the rather flashy Barcelona Coupes. This isn't the Barcelona and frankly I think a prettier car. It does come with Barcelona Emblems as many AMC models used that style emblem. It has the one year only to 1978 Steering Wheel. The very good news too is that the Glass is very good shape. The windshield isn't cracked. That's an expensive item to find if you need one. I own two other Coupes that are running and driving and am trying to downsize my collection. I wanted this saved because it's so rare and at the very end of the production run. almost 100,000 coupes were produced between Fall of 1973 and Spring of 1978. A five year model run. The values of these coupes seem to be appreciating quickly due to their quirky style and presumably their NASCAR heritage. Normally, I'd charge a storage fee after 30 days, but I want this car saved so no storage charges will apply here and hopefully it finds a buyer to restored it. Again, my feeling is that it's a very easy restoration. Finally, the keys are missing. I purchased the car with no keys. Also, I have the title that was signed over to me, but Maine isn't a Title State and I'm not able to secure a new title. I've attached photos here so you can see, the previous owner signed it and put my name on it. But again, The State of Maine will not issue a title on a vehicle this old. Possibly I can get a Title Letter from them which would help. I paid $250.00 for the car. About $600.00 to transport it to Maine. and about $200.00 for some spare parts that come with the car. So I'm not looking to make a profit on this, I just want it to go to a good home. I've attached two photos of my other two cars. I'm familiar with these AMC's and feel confident that I can say that this one is definitely a re-storable car, it's not junk. 1979 AMC PACER WAGON for RESTORATION or PARTS No Reserve 1972 AMC Javelin for restoration or parts 1974 AMC Javelin for restoration or parts 1972 AMC Javelin SST - for parts or restoration only 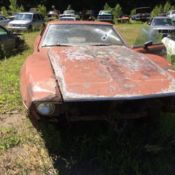